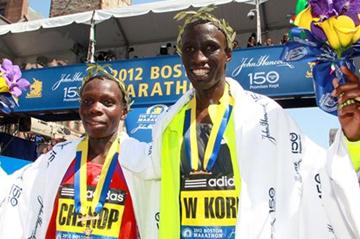 Defending champions Korir and Cherop set to return to Boston

Kenyan duo Wesley Korir and Sharop Cherop will compete in the 2013 edition of the Boston Marathon, an IAAF Gold Label Road Race, on April 13 as they aim to defend the titles they won earlier this year.

Back in April, Korir timed his race to perfection and coped best with the unusually hot conditions. Resisting the surges of his opponents earlier in the race, the 30-year-old went on to win comfortably by 26 seconds in 2:12:40.

Although it was one of his slowest races to date, the victory in itself was the biggest achievement in Korir’s career so far.

More recently, Korir – a two-time winner of the Los Angeles Marathon – reduced his personal best to 2:06:13 when finishing fifth at the Chicago Marathon in October.

The women’s race at this year’s Boston Marathon was much closer as Cherop won in a sprint finish by just a couple of seconds to improve on her third-place finish from the year before.

Hampered by the heat, her winning time was 2:31:50. Just three months before, she had clocked a lifetime best of 2:22:39 in Dubai, while just last month in Turin she notched up another victory to win comfortably in 2:23:57.

“I will be in Boston to try to win again and perform at my best level,” said Cherop, 28. “I know that there are some of the best athletes in the world competing in Boston in 2013, but I’ll be ready for the big race.

“The course is very hard because there are a lot of hills and you are running without pacers, but I like this course because it’s also making a natural selection among the athletes,” added the 2011 World bronze medallist.

"It is with great pride that we welcome back Wesley Korir and Sharon Cherop to defend their titles at this year’s Boston Marathon," said Tom Grilk, executive director of the Boston Athletic Association. "Their insightful and tactical races in challenging conditions last year will be remembered for years to come as part of Boston’s rich tradition of excellence.”

Jon Mulkeen and Organisers for the IAAF