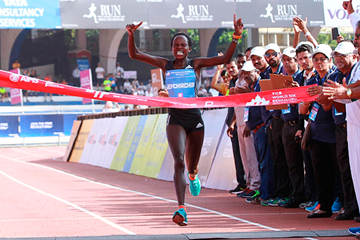 Kenya’s world half marathon champion Peres Jepchirchir will have the Airtel Delhi Half Marathon course record in her sights when she lines up for the IAAF Bronze Label Road Race on Sunday 20 November.

Jepchirchir is the biggest name in the women’s elite field as the organisers released the full list of the invited international runners who will contest the 12th edition of India’s leading half marathon.

She will be chasing the course record of 1:06.54 set by her compatriot Mary Keitany in 2009. She will also look to extend her winning streak to four consecutive half marathons after her recent victory in Valencia.

“I’m recovering well after my race in Valencia and getting ready for the Airtel Delhi Half Marathon, where I think I can get the course record,” said Jepchirchir.

“Mary’s record is a good one but my time of 1:07:09 in Valencia showed that I am in good shape, even though I was a little worried beforehand there about not having done my best training due to a few small injury problems and having changed my plans to have my marathon debut around this time.

“However, I have felt no ill-effects from my run in Valencia and I am getting ready to return to India and hope to run well again, especially if I have a month’s good training.

Jepchirchir’s PB of 1:06:39, set when finishing fourth at the Ras Al Khaimah Half Marathon in February, is faster than the Delhi Half Marathon course record, so going into new territory in the Indian city is certainly not an unreasonable target.

In a year which has seen Jepchirchir establish herself as one of the world’s top road runners, her race in Ras Al Khaimah has been her only loss in seven top-class outings so far in 2016.

But she won’t be the fastest woman on the start line in Delhi. Ethiopia’s Worknesh Degefa and Kenya’s Mary Wacera both have quicker half marathon personal bests, having clocked 1:06:14 and 1:06:29 respectively in races earlier this year.