The IAAF Diamond League has reached the half-way point in the road to the final.

Six meetings have already taken place this year and there are six more to go before the series reaches its climax at the finals in Zurich and Brussels at the end of August.

Already this year there has been several record-breaking performances, a clutch of intense rivalries developing, and several new stars emerging on the world level.

One of the biggest stories to emerge from this year’s series is in the men’s 400m hurdles, where Abderrahman Samba has been on a record-breaking rampage. The Qatari broke the IAAF Diamond League record with 47.57 in Doha, the first meeting of this year’s series, which merely set the tone for the rest of his campaign.

Chased by world champion Karsten Warholm in his next three IAAF Diamond League appearances, Samba won in Rome (47.48), Oslo (47.60) and Stockholm (47.41), twice improving on the mark he set in Doha and taking down the Asian record in the process.

Warholm has been just a couple of strides behind Samba in their three clashes this year and it seems as though it’s just a matter of time before the young Norwegian gains his revenge.

IAAF Athlete of the Year Mutaz Essa Barshim has been similarly dominant. After a world-leading 2.40m in Doha, the Qatari high jumper also won in Eugene and Oslo, but world indoor champion Danil Lysenko is getting closer to Barshim with each meeting.

Sprinting events produced most of the highlights in Eugene as Noah Lyles blazed to victory in the men’s 200m in a world-leading 19.69 and Olympic 400m champion Shaunae Miller-Uibo, Lyles’ training partner, won the women’s 400m in 49.52.

The shot put rivalry between Olympic champion Ryan Crouser and world champion Tom Walsh has been another highlight of the year so far. Crouser won in Eugene with 22.53m, just three centimetres shy of the IAAF Diamond League record, but Walsh gained revenge in Oslo with 22.29m as both men threw beyond 22 metres.

But perhaps the biggest talking point of the 2018 IAAF Diamond League came in Stockholm when Cuba’s Juan Miguel Echevarria sailed out to 8.83m in the long jump. At 2.1m/s, the tailwind was agonisingly just a fraction over the allowable limit, but it confirmed that the teenager’s victory at the IAAF World Indoor Championships Birmingham 2018 was not a fluke.

Earlier in the series, Echevarria had been beaten by world champion Luvo Manyonga in Rome. Many comparisons have already been made between this new rivalry and the memorable performances from long jump legends Carl Lewis and Mike Powell.

Echevarria isn’t the only new star to emerge this year. Armand Duplantis has continued his rise – quite literally – in the pole vault and won in front of his home crowd in Stockholm. British sprinter Reece Prescod, Kenyan 800m runner Wyclife Kinyamal and US middle-distance runner Shelby Houlihan have also notched up surprise victories in this year’s series.

The world-wide reach of the IAAF Diamond League has also achieved impressive figures. More than 4 million minutes of action on the official IAAF Diamond League YouTube account have been watched in 2018, while combined social media impressions are nearing 22 million.

But for all the excitement in the 2018 IAAF Diamond League so far, there is still a long way to go. 2916 points have been awarded across the first six meetings; 2988 points are up for grabs throughout the next six fixtures as athletes try to earn a spot in one of the two finals.

And with collegiate stars such as Michael Norman, Rai Benjamin and Sydney McLaughlin having turned professional, the rivalries are only going to get more intense as the season goes on.

Following a brief mid-season pause after Stockholm, the IAAF Diamond League continues in Paris on Saturday (30) before heading to Lausanne, Rabat, Monaco and London in July. Birmingham will then host the last of the ‘qualifying’ IAAF Diamond League meetings in August with the 2018 champions being decided at the finals in Zurich and Brussels. 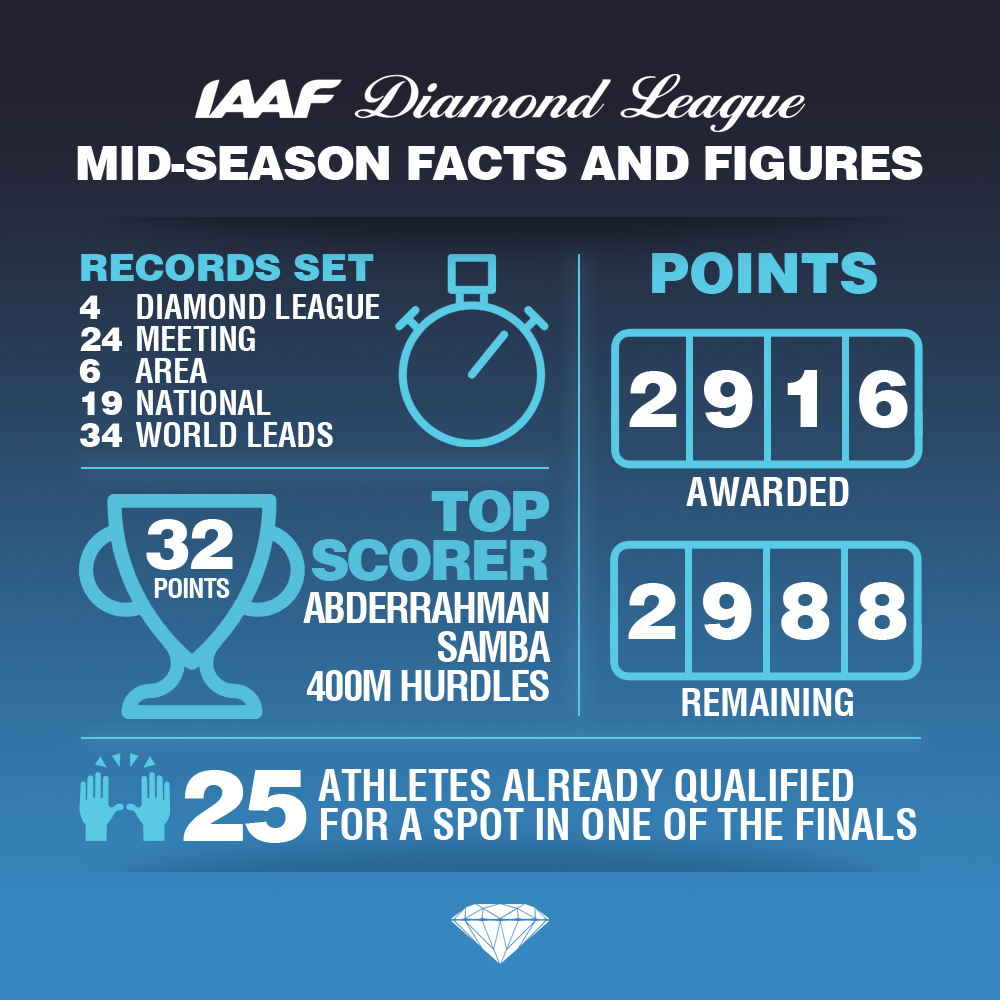