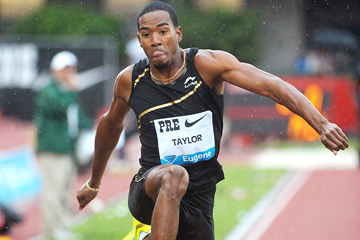 US record-holder Christian Taylor’s road to a second Olympic triple jump title faces a major test at the Prefontaine Classic, as he will be one of five global gold medallists at the IAAF Diamond League meeting in Eugene on 28 May.

Taylor’s leap of 18.21m in Beijing last year earned him his second world title and was just eight centimetres shy of Jonathan Edwards’ 20-year-old world record. Taylor finished the season with his fourth Diamond Race trophy, having jumped beyond the 18-metre barrier on four occasions in 2015.

France’s Teddy Tamgho is the world indoor record-holder and won the 2013 world title with 18.04m. One of just five men in history to have jumped beyond 18 metres, Tamgho also won the 2010 world indoor title.

USA’s Will Claye succeeded Tamgho as the world indoor champion in 2012. The Olympic silver medallist – and Olympic bronze medallist in the long jump – set the stadium record of 17.66m in Eugene when winning at the 2014 Prefontaine Classic.

Before winning the world indoor long jump title last month, Marquis Dendy won four NCAA titles – two in the long jump and two in the triple jump – at Hayward field. It was also the venue of his US Championships victory last year where he produced his best ever outdoor jumps: a wind-aided 8.68m and a wind-legal 8.39m.

China’s Dong Bin is the newly crowned world indoor champion. Before his victory in Portland, he set an Asian indoor record of 17.41m.

Benjamin Compaore preceded compatriot Tamgho as world junior champion in 2006. He won the European title in 2014 with a PB of 17.46m and then bettered it by two centimetres one month later to win the IAAF Continental Cup title.

Omar Craddock jumped a PB of 17.53m last year to win his third US triple jump title. He was in line for a bronze medal at last year’s World Championships until the final round and he ultimately had to settle for fourth place.