Twenty-seven years after US rivals Carl Lewis and Mike Powell duked it out at the IAAF World Championships in Tokyo, where the latter set the world long jump record of 8.95m that stands today, something truly special could be on in the Letzigrund Stadium in Zurich were the first of the two IAAF Diamond League finals takes place on August 30, the day before the concluding final in Brussels.

Although one remaining qualifying competition remains, in London, the Zurich final is already guaranteed the presence of South Africa’s world champion Luvo Manyonga, and the 19-year-old Cuban Juan Miguel Echevarria, who has come in from left field to top the 2018 world list with 8.68m – as well as recording an astonishing 8.83m in Stockholm in a following wind speed of 2.1m/s – just 0.1m/s above the allowable limit for record purposes.

Also in the mix will be USA’s Olympic champion, Jeff Henderson.

Zurich is also guaranteed a meeting between Turkey’s world 200m champion Ramil Guliyev and one of the rising young forces in world sprinting, Noah Lyles. With just one more qualifying race to go – in Monaco – the 20-year-old from Florida has already booked his place with victories at the Doha, Eugene and Lausanne IAAF Diamond League meetings, with Guliyev winning at Oslo and Stockholm in his absence.

Also there for sure will be Canada’s Aaron Brown, who has one more point than Lyles having run an extra race, and Trinidad and Tobago’s Jereem Richards.

Even though there are two more qualifying races left in the men’s 1500m, in Rabat and Monaco, Kenya’s world silver medallist Timothy Cheruiyot, unbeaten over the distance this season, has done enough to qualify with three wins out of three so far, and will face the man who beat him to the world title in London last year, Elijah Manangoi.

Lausanne marked the sixth and last qualifying race for the men’s 400m hurdles, but the Qatari who has won all six – Abderrahman Samba – will miss the Zurich final as he is committed to competing at the Asian Games.

In his absence, Norway’s fellow 22-year-old world champion Karsten Warholm, who has put together what would, in other circumstances, have been an outstanding sequence of races himself, will have a bit of breathing space for once – although maybe less than he would like if the defending IAAF Diamond League champion from the British Virgin Islands, Kyron McMaster, can fully recover from the problem that caused him to pull up halfway down the back straight in the Lausanne race.

Monaco remains in the men’s shot put qualifying sequence, but already some of the event’s stellar performers have booked their Zurich appearance, including New Zealand’s world and Commonwealth champion Tomas Walsh, US Olympic champion Ryan Crouser – assuming he can recover from the injury he incurred at the US Championships – and defending IAAF Diamond League champion Darrell Hill of the United States.

Despite the bizarre incident on the final bend of the 5000m at last Thursday’s IAAF Diamond League meeting in Lausanne, when he was hauled out of contention for victory by his falling Ethiopian colleague Yomif Kejelcha, 18-year-old Selemon Barega made certain at least of qualifying for the second IAAF Diamond League final in Brussels by recovering his momentum and chasing home the Bahraini runner who had taken advantage of his unique opportunity, Birhanu Balew.

With two qualifying races remaining, in Rabat and London, Barega and Balew have already done enough, as has a second Ethiopian, Abadi Hadis.

The big question is: how quickly will Barshim recover from the ankle injury he sustained in Hungary last Monday making an attempt at what would have been a world record of 2.46m, which kept him out of the Lausanne meeting?

With two qualifying meetings remaining in the men’s pole vault, in Rabat and London, world champion Sam Kendricks of the United States and Poland’s European indoor champion Piotr Lisek are already through to the Brussels final.

One qualifying meeting for the men’s triple jump remains, in Monaco, but already the pair whose rivalry has seen both reach 18-metre territory in recent years, world and Olympic champion Christian Taylor and Cuba’s Pedro Pablo Pichardo, are through.

Men’s discus qualifying is complete, with Jamaica’s Fedrick Dacres leading the standings after winning three of the four meetings, ahead of Lithuania’s world champion Andrius Gudzius.

Despite picking the 1500m rather than the 800m in Lausanne, South Africa’s world and Olympic champion Caster Semenya is already guaranteed a spot in the Zurich final with two more qualifiers to go in Rabat and Monaco. Two others are also through: world and Olympic silver medallist Francine Niyonsaba of Burundi, who won in Semenya’s absence in Switzerland, and Ethiopia’s Habitam Alemu.

USA’s Olympic champion Dalilah Muhammad has already booked her place in the 400m hurdles final along with Jamaica’s Janieve Russell.

Even though there are two more qualifying events for the women’s high jump, in Rabat and London, it will come as no surprise that double world champion Maria Lasitskene has already booked her ticket for Zurich, along with Mirela Demireva of Bulgaria and Yuliya Levchenko of Ukraine.

With qualifiers in Monaco and Birmingham still to come, three women pole vaulters are already booked for the Zurich final: world indoor champion Sandi Morris of the United States, her compatriot Katie Nageotte and Anzhelika Sidorova.

London remains as a qualifier, but three women are through to the Zurich javelin final: Tatsiana Khaladovich of Belarus, Lyu Huihui of China and Nikola Ogrodnikova of the Czech Republic.

With qualifiers remaining in London and Birmingham, four women are already through to the 1500m final in Brussels: Britain’s Laura Muir, Morocco’s Rababe Arafi, Eugene and Lausanne winner Shelby Houlihan of the United States, and Gudaf Tsegay of Ethiopia.

Just one qualifying meeting remains in the women’s 3000m steeplechase, in Monaco, but there is only one remaining place left in the Brussels final, which will feature Kenya’s 2015 world champion and event leader Hyvin Kiyeng, her prodigious young compatriot Celliphine Chespol and world champion Emma Coburn from the United States.

Two 100m hurdles qualifying meetings remain, at Rabat and London, but there is already one qualifier for Brussels in Brianna McNeal, the Olympic champion from the United States.

Only the London qualifier remains in the women’s discus, and Croatia’s Sandra Perkovic, seeking a seventh overall IAAF Diamond League title, knows she will face the Cuban pair of Yamie Perez and Denia Caballero along with Andressa de Morais of Brazil. 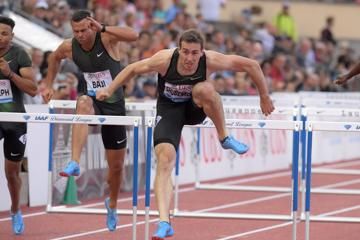