Many of the finalists have already been decided but the last places in the IAAF Diamond League finals will be up for grabs at the final qualifying meet of 2018 in Birmingham on 18 August.

Organisers of the IAAF Diamond League finals in Zurich (30 August) and Brussels (31 August) will invite the top-ranked athletes based on points achieved at the 12 qualification meetings.

The 18 Diamond disciplines not being contested at the Muller Grand Prix in Birmingham have already made all of their scheduled appearances in the earlier qualifying meetings. The current standings will be used to form the fields in those events (the men’s 200m, 1500m, 5000m, 400m hurdles, pole vault, long jump, triple jump, shot put and discus, and the women’s 100m, 400m, 800m, 3000m steeplechase, 100m hurdles, high jump, triple jump, discus and javelin).

But in the 14 Diamond disciplines being staged in Birmingham, the competition is expected to be fierce as athletes try to qualify for a place in the final, where the winners will earn the honour of being crowned the IAAF Diamond League champion and pick up a US$50,000 winning bonus.

Following his wins in Rome, Paris and London, USA’s Ronnie Baker has guaranteed himself a place in the 100m final in Brussels. Compatriot Michael Rodgers and South Africa’s Akani Simbine, currently equal second in the IAAF Diamond League standings, have also done enough to qualify. But the remaining five spots are still open.

World indoor champion Christian Coleman was out of action for six weeks with a minor injury but returned to win in Rabat. If he competes in Birmingham, a top-seven finish will be enough to secure a lane in Brussels. Similarly, world indoor silver medallist Su Bingtian, British champion Reece Prescod and Jamaica’s Yohan Blake all need a few more points to book their place in the final.

The current top four in the women’s 200m standings – USA’s Jenna Prandini, Jamaica’s Shericka Jackson, Marie-Josee Ta Lou of the Ivory Coast and Shaunae Miller-Uibo of The Bahamas – will be invited to compete over half a lap in the Belgian capital. The other half of the final will be determined by what happens in Birmingham.

The women’s 1500m has produced some memorable races in this year’s IAAF Diamond League and the likes of Laura Muir, Shelby Houlihan, Jenny Simpson, Sifan Hassan, Gudaf Tsegay and Rababe Arafi can all be expected to be in the final in Brussels. The six remaining spots could be claimed by any of a number of athletes at the last qualifying meeting on 18 August.

Hassan has also earned enough points for a spot in the 5000m final in Zurich. Whether she’ll attempt an ambitious double on back-to-back days is another matter, but the field in the longer event could also feature the likes of world champion Hellen Obiri, Genzebe Dibaba, Agnes Tirop and Letesenbet Gidey, plus whoever else performs well in Birmingham.

Ahead of the last qualifying meeting in Birmingham, Kenyan duo Wyclife Kinyamal and Ferguson Rotich are the only athletes who have already done enough to earn a spot in the 800m final in Brussels.

High jumpers Danil Lysenko, Majd Eddin Ghazal, Donald Thomas and Wang Yu can also be expected to compete in the Belgian capital, so too can long jumpers Lorraine Ugen, Malaika Mihambo, Shara Proctor and Ivana Spanovic. The remaining spots in those fields will be completed after the results from Birmingham are in.

Qatar’s Abdalelah Haroun is the only athlete who currently has enough points to earn a spot in the men’s 400m final in Zurich. US trio Paul Dedewo, Fred Kerley and Michael Cherry are all currently ranked in the top seven, as is Steven Gardiner of The Bahamas and Isaac Makwala of Botswana. The one-lap sprint in Birmingham will determine which of those will compete in the final.

Athletes in Birmingham will be competing for the two remaining spots in the 110m hurdles final in Brussels, where they can expect to join the likes of Sergey Shubenkov, Devon Allen, Orlando Ortega, Omar McLeod, Ronald Levy and Hansle Parchment.

Five of the six highest vaulters in history will be invited to compete in Zurich as the likes of Sandi Morris, Jenn Suhr, Katerina Stefanidi, Eliza McCartney and Yarisley Silva have already done enough to qualify for the women’s pole vault final. They will be joined by Anzhelika Sidorova, Katie Nageotte, Holly Bradshaw and whoever else features in the top 12 in the standings after Birmingham.

Shot put leader Raven Saunders will be joined by three different winners of global titles in the final in Brussels as Valerie Adams, Christina Schwanitz and Gong Lijiao have all earned an invite already. Four other spots are up for grabs in Birmingham.

Season-long consistency has meant 400m hurdlers Shamier Little, Dalilah Muhammad, Janieve Russell, Georganne Moline and Sage Watson have already earned enough points for a spot in the final in Zurich. The field will only be completed, though, after Birmingham’s one-lap hurdles event.

Benjamin Kigen, the winner in Eugene and Rabat, leads the steeplechase standings from Monaco winner Soufiane El Bakkali. They, along with Evan Jager, Conseslus Kipruto and Hillary Bor, will be able to trade in the points they’ve already earned for a trip to Zurich for the steeplechase final. If any other athletes wish to join them, they’ll need to pick up a few more points in Birmingham first.

A prize pot of US $3.2 million will be on offer at the series' two final meetings. In all, the IAAF Diamond League will be awarding US$5.6 million in prize money in 2018. 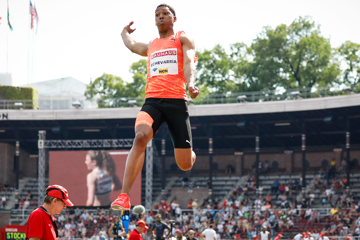