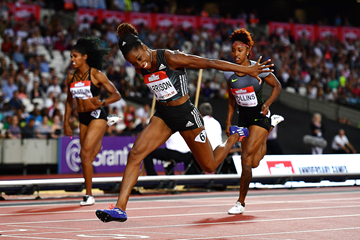 The 2016 IAAF Diamond League season came to a close with finals in Zurich and Brussels over the past two weekends, with a thrilling summer of Diamond Race action drawing to a superb climax.

As the 32 Diamond Race winners make space on the mantelpiece for their Diamond Race Trophies, we take a look at how each of them won the competition during the course of the summer.

Eight athletes who won the Diamond Trophy last season managed to successfully defend their title in 2016.

In the men's 200m, Alonso Edward waltzed to a third consecutive victory, finishing in the top three at each of the seven rounds. It was Diamond Trophy number two for high jumper Ruth Beitia, meanwhile, who defended her title equally as comfortably, while Asbel Kiprop held Elijah Manangoi at arm's length for much of the season, eventually winning the men's 1500m by 14 points.

Polish discus thrower Piotr Malachowski and Colombian triple jumper Caterine Ibarguen both won the competition for a fourth time. Though Ibarguen finally saw her 34-strong winning streak broken in Birmingham, her overall victory in the Diamond Race was never in doubt.

In the men's triple jump, Christian Taylor secured his fifth Diamond Trophy by a hefty 28 points, while women's discus legend Sandra Perkovic also made it five, becoming one of few athletes ever to win maximum points in an IAAF Diamond League season.

But even Perkovic isn't as dominant as pole vaulter Renaud Lavillenie. Despite failing to win his season opener, Lavillenie rallied to produce a vintage season and claim his seventh consecutive Diamond Trophy. He remains the only athlete to have won the competition in every single year of its existence.

After a season away from the action, Valerie Adams returned in the women's shot put, winning four of seven rounds to get her hands on a fifth Diamond Trophy. Like Adams, LaShawn Merritt reclaimed the title he had last won in 2014 in the men's 400m. In an open season in the men's 100m, meanwhile, Asafa Powell stormed to victory in Zurich to snatch the title at the last minute.

Powell wasn't the only athlete to make a late break for glory in this year's Diamond Race. Jakub Vadlejch's victories in London and Paris saw him catch up with Thomas Rohler in the javelin, before beating him with his penultimate throw at the final in Zurich. In the men's 400m hurdles, Kerron Clement managed to overtake both Javier Culson and Michael Tinsley with his late-season victories.

Muktar Edris looked a sure bet to win his first Diamond Trophy for most of the season, but failed to win any points from the last three rounds, allowing Hagos Gebrhiwet to dislodge him from the top of the standings with a win at the Zurich final of the men’s 5000m

The most dramatic finish, though, came in the women's 1500m. Trailing Faith Kipyegon for most of the season, Britain’s Laura Muir beat her Kenyan rival in Paris and then overtook the Olympic champion on the final bend in Zurich, only to be beaten over the line at the last minute by Shannon Rowbury. Kipyegon, meanwhile, had slipped to seventh on the night, meaning second place was just enough for Muir to win the overall title.

The 2016 season had its fair share of Diamond Race duels. Stephenie-Ann McPherson and Natasha Hastings vied all summer long for top spot in the women's 400m, before McPherson eventually won the Trophy by finishing ahead of Hastings in Brussels.

Ruth Jebet was also unable to shake off Hyvin Kiyeng in the women's 3000m steeplechase. Only at the final in Zurich did the new world record-holder complete a perfect season with the Diamond Trophy.

Ferguson Cheruiyot Rotich dominated the early season in the men's 800m, and managed to hold off a late challenge from Pierre-Ambroise Bosse with top-four finishes at each of the last three rounds. Joe Kovacs meanwhile, looked certain to defend his 2015 title for much of the season, before being shocked by Tom Walsh in the last few contests. The New Zealander won in Paris and Zurich to pip Kovacs to the men's shot put title.

In the women's 400m hurdles, Cassandra Tate and Eilidh Doyle occupied the top two spots for most of the season, with Tate eventually prevailing in Brussels. The best duel of all, however, was between Elaine Thompson and Dafne Schippers. Just as in the Olympics, the two sprinters battled it out for the top spot over 100m and 200m. After Schippers secured the 200m Diamond Trophy in Zurich, Thompson wrapped up the 100m title in Brussels.

Several athletes were dominant all summer long. Conseslus Kipruto regained his 2013 title in an extraordinarily dominant season in the men’s 3000m steeplechase, while Almaz Ayana (5000m), Ivana Spanovic (long jump), Madara Palameika (javelin) and Ekaterini Stefanidi (pole vault) topped the standings from start to finish, as they each won their first ever Diamond Trophy.

In the women's 800m, Caster Semenya dominated for much of the season, holding off Francine Niyonsaba in the later stages to win the title.

The most striking newcomer of all, though, was Kendra Harrison. In an extraordinary season, the 100m hurdler failed to make the US Olympic team, broke a world record, and won at seven IAAF Diamond League meetings to bulldoze her way through the Diamond Race.

The men's jumps produced arguably some of the most exciting Diamond Race action, however.

Erik Kynard book-ended his season with wins in Doha and Brussels, the latter meaning he just beat the likes of Mutaz Essa Barshim, Bogdan Bondarenko and Robbie Grabarz to the high jump title. In the men's long jump, Fabrice Lapierre managed to win the Diamond Trophy without winning a single competition during the season. His consistent top-three finishes were enough to put him six points ahead of Gao Xinglong in the final standings.