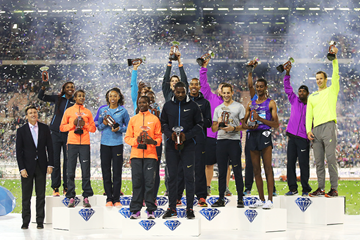 A look back at the 2015 Diamond Race – IAAF Diamond League

Last Friday, the 2015 IAAF Diamond League season came to its conclusion in Brussels. The last 16 Diamond Race winners of the year were crowned, and the final chapter of this year’s Diamond Race story was completed.

It has been a gripping tale, complete with hegemonies, nail-biting duels, crucial turning points and late comebacks. Here's a final look at how this year's 32 Diamond trophies were finally won in Zurich and Brussels.

Sandra Perkovic and Caterine Ibarguen took victories in the women's discus and triple jump respectively in Brussels. They not only wrapped up the Diamond trophy, but also established themselves as the most dominant athletes of this IAAF Diamond League season, with six wins each.

In terms of dominance, they were closely followed by Eunice Sum and Christina Schwanitz, who had won the 800m and shot put Diamond Races in Zurich, and each ended with five victories. Justin Gatlin also won on five occasions this season, though only four of them were in the 100m, in which he triumphed by a whisker in Brussels to take the Diamond trophy.

For many athletes, even consistent victories were not enough to dominate this season. On Friday, Christian Taylor won for the fourth time, having had to beat Pedro Pablo Pichardo to claim his fourth Diamond Trophy. Likewise, Renaud Lavillenie went to Brussels needing to beat Konstadinos Filippidis. He claimed a fourth victory of the season and a sixth Diamond Trophy in Belgium.

Kirani James, meanwhile, failed to claim victory in Zurich, but successfully defended his Diamond trophy by virtue of beating Wayde van Niekerk, who had been breathing down his neck for most of the season. Piotr Malachowski had been in a similar position in Zurich. Though he failed to beat Robert Urbanek in the final, his four victories were enough to hold off his compatriot in the Diamond Race.

There were several athletes who failed to take victory on the night in their respective finals, but still managed to secure the Diamond trophy.

Nijel Amos could only finish second in Brussels, yet successfully defended his Diamond Race title. In the women's high jump, Ruth Beitia won her first ever Diamond Race despite only managing a third-place finish on Friday night.

Allyson Felix and Sifan Hassan, meanwhile, won the women's 200m and 1500m Diamond Races despite finishing as runners-up in Brussels. Second place in the Belgian capital was also enough for Bershawn Jackson to win the men's 400m hurdles Diamond Race, and for Tianna Bartoletta in the women's long jump, while David Oliver's second place in Zurich still saw him pip Orlando Ortega to the Diamond trophy.

There were similar scenarios in both 3000m steeplechase Diamond Races. Jairus Birech came second in Zurich in the men's race, which was more than enough for him to retain his Diamond trophy. In the women's race in Brussels, meanwhile, Virginia Nyambura finished sixth. One of the surprises of the season, Nyambura managed to win the Diamond Race nonetheless – with a margin of just two points.

Another surprise this year had come in the shape of Almaz Ayana. The rising Ethiopian star ended her season with a victory over Genzebe Dibaba in Zurich, but it was not enough to beat her more famous compatriot in the Diamond Race. Dibaba claimed her first Diamond Race title by a margin of two points in the end.

Asbel Kiprop, Alonso Edward and Tero Pitkamaki had all been behind in the Diamond Race prior to the finals. Kiprop's victory in the 1500m in Zurich saw him surge back to the top, however, and Edward did the same in the 200m. Most impressive, however, was Pitkamaki. The Finn overturned a six-point deficit with his victory in Brussels, snatching the Diamond trophy from Vitezslav Vesely to become the first Finnish athlete to win the Diamond Race.

For Joe Kovacs, Zuzana Hejnova, Dawn Harper Nelson and Yomif Kejelcha, it also came down to victory in the final. All four athletes had been either joint leaders or had led by the most slender margins ahead of the finals. Kovacs triumphed over David Storl in the men's shot put, while Hejnova beat Kaliese Spencer in the women's 400m hurdles, both of them winning not only their respective final, but also a season long two-way battle in their Diamond Race.

For Harper Nelson, it had been a three-way fight. In Brussels, she crossed the line only just ahead of Sharika Nelvis and Jasmin Stowers, the two athletes who had been tied on points with her before the final. Kejelcha, meanwhile, became the only man to win more than once in this year's 5000m, thereby taking the Diamond Trophy.  Kejelcha's victory was the final Diamond Race event of 2015.

Shortly after his victory, the stadium was flooded with the glow of thousands of blue glowsticks, as spectators bade farewell to this season's Diamond League. The imagery seemed appropriate; it has truly been an electrifying season.

For full Diamond Race statistics relating to the 2015 season and IAAF Diamond League history, please see the related document on the right-hand side of the page.