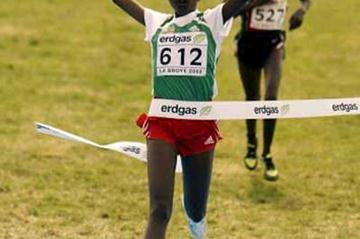 A devastating attack in the last 200m of the women’s junior race at the 31st IAAF World Cross Country Championships in Lausanne-La Broye, was enough to secure the gold medal for Ethiopia’s Tirunesh Dibaba, on the 6215m course at the national equestrian centre.

Peninah Chepchumba of Kenya who was fifth in 2002, made her race intentions very obvious from the beginning, taking an immediate dual lead with compatriot Jepchumba Koech the national junior champion, as the field of 104 runners came together some 150m after exiting the team pens on the starting line.

Behind the Kenyan duo the rest of the leading pack quickly took shape, and it was very much a Kenyan verses Ethiopian dual match that resulted. Only Anesie Kwizera of Burundi and South African Irvette Van Blerk were even temporarly able to battle with a pack of  four Kenyans and four Ethiopians that held sway by the end of the first kilometre, which was passed in a little over three minutes (3:07).

The principal figures in the pack in addition to Chepchumba and Koech, who continued to push the pace throughout the first lap, were the Ethiopians Meselech Melkamu, the national junior champion, Sentayehu Ejigu, Gelete Burka and Dibaba, who of all the Ethiopian squad kept her face buried within the leading pack for much of the first lap.

However, when Chepchumba started pushing the pace just before the start of the second full and final lap of the course, followed closely by Melkamu, suddenly Dibaba who was the World junior silver medallist last year, was made to show what form she was in.

The Kenyan drive continued as Chepchumba piled on the pace, with the result being that the original leading pack broke down to just her, and the three Ethiopians Melkamu, Burka and Dibaba, who were bunched up close behind. Emily Chebet the only other Kenyan within sight was slightly off the back of this group, and she was never able to close with this leading quartet.

Chepchumba encouraged by the devastation that her relentless push was causing seemed to go up a further gear into overdrive, and suddenly her three green vested Ethiopian pursuers became just one, Dibaba.

The two runners had run totally contrasting races, with Dibaba never inclined to put any effort into making the race which the Kenyan had so far dictated. Here perhaps was the root of Chepchumba’s ultimate demise, as the gigantic effort which she had put into the early stages must certainly have weakened her strength for the final sprint to the finish.

With 500m to go, Chepchumba was trying increasingly desperately to break the grip of Didaba who was running at her heels.

However, 150 metres later rather than having secured her leading position, the Kenyan found herself running side by side with the Ethiopian, and as the two turned into the finishing straight it was Didaba who burst into the lead.

Dibaba’s alchemy was completed successfully as the finish line was crossed in 20:21, and the silver of 2002 was turned very impressively into gold as a result of a miraculous finishing kick.

Chepchumba came in only a second behind (20:22), with Gelete Burka (20:28) a distant third. With fellow Ethiopians Melkamu in fourth (20:33) and Eligu in sixth (20:56), the team title went to Ethiopia too (14 points), with the defending champions Kenya in silver (22 points), and a Moroccan team led by Mariem Al Aoui Selsouli (13th 21:54) in a distant bronze (78 points), as is indicated by the vaste points difference.

Didaba who is a cousin of double Olympic 10,000m champion Derartu Tulu, becomes the first Ethiopian winner of this junior title since Werknesh Kidane in 1999, who as an incidental postscript to this afternoon’s action at the first day of the 31st IAAF World Cross Country Championships later was to become the senior women's long course winner.