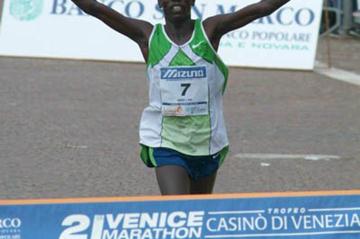 Jonathan Kipkorir Kosgei from Kenya took the honours at the 21st edition of the Venice Marathon, setting a new PB of 2:10:18 after a dramatic battle in the heart of Venice against Italian Alberico Di Cecco, who came back successfully after a difficult season with a confidence-boosting 2:10:21 over a new but challenging course from Villa Pisani in Stra to Riva dei Sette Martiri in Venice. Kenyan Lenah Cheruyiot won the women’s race in 2:33:44 defeating former World record holder Tegla Loroupe (2:35:50).

The initial pace was not particularly fast. In the beginning of the race Kenyan pacemakers Paul Kimugul and Wilfred Taragon set the early pace for the lead group of nine - six Kenyans and Italians Daniele Caimmi, Migidio Bourifa and Di Cecco - who reached 5 Km in 15:30, 10 Km in 30:50 and 15 Km in 45:55. Kenyan favourites Kosgei, William Rotich and Paul Lokira also in this group.

Caimmi and Bourifa stayed with the pacemakers at the lead of the race running 64:49 through the halfway mark. One second behind followed Kosgei, Rotich, Steven Cheptot, Paul Lokira and Di Cecco. The Italian, who ran his last Marathon eleven months ago in New York (sixth in 2:11:33), started more conservately. Taragon was the first pacemaker to drop out at 25 km (1:16:50).

After running for 4 kilometres in the centre of Mestre (25 Km) runners crossed San Giuliano’s Park, a challenging section of the course inside a vast green area between Mestre and Venice. Kimugul set the pace until 30 km (1:32:20), four seconds ahead of Kosgei, Lokira and Bourifa. One second behind followed Rotich and Di Cecco.

Five men remained in the lead when the race reached its climax over the 5 km Ponte della Libertà (Bridge of Freedom). They were Rotich, Lokira, Kosgei, Di Cecco and Bourifa who passed 35 km in 1:48:05.

Di Cecco went to the front pushing the pace in the 37th kilometre. Two kilometres later Kosgei launched his first attack but Di Cecco responded. The Italian ran on Kosgei’s heels in the most difficult section of the race marked by the famous 14 bridges.

Kosgei pulled away from Di Cecco by some metres but the race was far from over. Kosgei increased his lead over Di Cecco but the Italian managed to resist his rival’s attack in Riva dei Sette Martiri.

“I set my PB in a very difficult race,” said Kosgei. “Di Cecco ran very well when he pushed the pace in the final part of the race. But I am very happy with my race and I thank the organisers for giving me the chance to compete here.”

Di Cecco, the third best Italian in history with 2:08:02 from the 2005 Rome Marathon, was moved after clinching runner-up place in his come-back.

“I thank my family and all those who helped me during a difficult 2006 season, especially my new coach Romano Tordelli who gave me the motivation to continue running,” Di Cecco said. “Professor Tordelli was like a second father because he was the person who believed in me. Venice was a very difficult race especially when we crossed the most challenging section of the course in the San Giuliano’s Park.”

Caimmi, who ran in the leading group until 25 km, began suffering cramps and was dropped but decided to continue, eventually finishing sixth in 2:16:28.

Kenyans Tegla Loroupe, twice World Marathon record holder and three-time World champion in the Half-Marathon, and Lenah Cheruyiot along with 2005 Italian Marathon champion Ivana Iozzia battled for victory in the women’s race which started at a conservative pace - 54:07 at 15 Km and 1:16:16 at the half.

The turning point of the race was between the 29th and 30th kilometre in San Giuliano’s Park when Cheruyiot and Loroupe upped the pace, pulling clear of Iozzia by six seconds at 30 Km (1:48:54).

Cheruyiot attacked at 35 km, building up a solid margin over Loroupe which proved to be decisive.

“This was the best race of my career,” said Cheruyiot. “It was very difficult today especially because of the bridges in the final kilometres.”