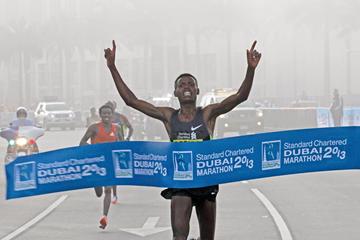 Organisers of the Standard Chartered Dubai Marathon have made some changes to the route which could result in some record-breaking performances at the IAAF Gold Label Road Race on 24 January.

The Dubai Marathon has already witnessed some of the fastest performances in history. At the 2013 edition, five men dipped under the 2:05 barrier for the first time in history, going one better than the four men who achieved the feat at the same race 12 months prior.

The course records were set in 2012 with Ayele Abshero clocking 2:04:23 and Aselefech Mergia running 2:19:31. Lelisa Desisa came close to his Ethiopian compatriot’s course record this year when winning in 2:04:45, but the mark is still one minute shy of Wilson Kipsang’s World record of 2:03:23 set in Berlin this year.

With ten performances quicker than 2:05, the Dubai Marathon has more clockings below that mark than any other Marathon in the world.

And now it’s set to be even quicker.

The 42.195km route will start on the Umm Sequiem Road close to the Dubai Police Academy and take the runners down Jumeirah Beach Road to the Union Flag before turning back along the beachfront road south past the Burj Al Arab and Madinat Jumeirah before the next major turn at the One & Only Royal Mirage.

The marathon fields will then head back up the Jumeirah Beach Road and turn into Umm Sequiem Road and fight it out towards the finish line.

“This year, our top five men’s times remain in the top ten times of all marathons in 2013, while Lelisa’s time was the fifth fastest of the year.

“Due to the ongoing development of Dubai, every year we have been forced to re-assess the route. Recently, many managers and agents of elite athletes have asked us to provide a route similar to the one we staged out of Dubai Media City in 2010 and 2011.

"The 2014 route is very similar in stages to that layout and we believe we have given them the dream route they are looking for and the times of the elites will reflect that.”

With prize money of USD$200,000 on offer for the winner, the Dubai Marathon is one of the world’s richest road races. It is also the biggest mass participation event in the Middle East with more than 20,000 runners expected to take part across the event’s three races in 2014.