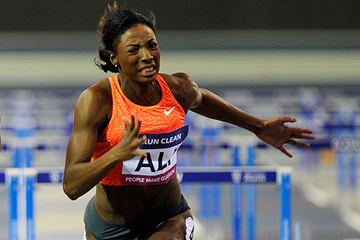 Organisers of the PSD Bank Meeting have confirmed that two-time world indoor champion Nia Ali will line up against European champion Cindy Roleder in the 60m hurdles at the IAAF World Indoor Tour meeting in Dusseldorf on 1 February.

Ali finished fourth in Dusseldorf last year in just her third hurdles competition since the birth of her son. Her form improved as the season progressed and she went on to successfully defend her world indoor 60m hurdles title in Portland, clocking 7.81.

At the Rio 2016 Olympic Games later that year, she took the 100m hurdles silver medal in 12.59, the third-fastest time of her career.

World silver medallist Roleder finished two places ahead of Ali in Dusseldorf last year, but both women were beaten by Alina Talay. The world bronze medallist from Belarus has triumphed in Dusseldorf in 2015 and 2016 and will return this year in a bid for a third successive victory.