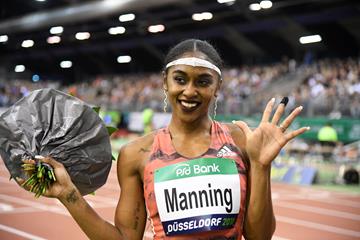 Organisers of the PSD Bank Meeting in Dusseldorf have announced two high-quality fields for the 60m hurdles races at the World Athletics Indoor Tour meeting on 4 February.

World indoor silver medallist Christina Clemons sits equal sixth on the world indoor all-time list with her best of 7.73. Before that, her PB was the 7.77 meeting record she set in Dusseldorf in 2018.

Jarret Eaton, who also claimed world indoor silver in 2018, will return to Dusseldorf with a point to prove. The US sprint hurdler lined up in Dusseldorf last year having won six of his seven indoor races that season, but he was disqualified in his heat for a false start. Nevertheless, he had earned enough points to win his discipline in the World Indoor Tour.