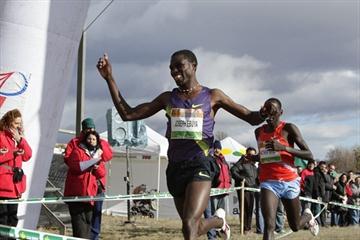 Soria, SpainKenya’s Joseph Ebuya confirmed his role as overwhelming favourite to capture the victory at the 17th ‘Cross Internacional de Soria’ on Sunday (21) in cold (6ºC) conditions with gusts of wind of up to 20 miles per hour.?

In doing so, the reigning men’s World Cross Country champion continued his successful roll on European soil  this autumn which includes two victories and a runner-up spots to his name so far.

?But also the event’s attention rested on the top Europeans’ performances thinking ahead to the continental championships to be staged in Albufeira, Portugal, in three week’s time. In that respect, Spain’s Ayad Lamdassem and Jesús España on the men’s section plus Morató and Portugal’s Ana Dias catapulted themselves into one of the favourite spots as all of them performed superbly in Soria.??

?The men’s 10,000m competition provided a fantastic spectacle with all the necessary ingredients to make the crowd enjoy: a reigning World champion and an array of top Spaniards in form fighting for a place on the podium.??The early stages witnessed the early lead of Italy’s former European junior XC champion Andrea Lalli but before the second kilometre Ebuya decided to step up the pace. With eight minutes on the clock only the Eritrean pair of Tesfayohannes Mesfin and Kiflon Sium, Lamdassem and Kenya’s Mathew Kisorio – a creditable sixth at the 2009 World Cross Country championships in Amman in 2009 – remained in close attendance to Ebuya.

Firstly Mesfin and later Sium lost ground and so the podium places seemed to be clarified before halfway in favour of Ebuya, Kipsorio and the Moroccan-born Lamdassem with the latter also fading shortly afterwards after Kipsorio increased the pace.

Meanwhile, España tried to overcome a fall in the early stages of the race – which led him to the last place at the very beginning - and the reigning European 5000m silver medallist managed to overtake rivals bit by bit to join soon the top-10.

The second half of the contest saw a thrilling head to head between Ebuya and Kisorio as the Kenyan pair had built a 10-second margin over Lamdassem by the seventh kilometre. Over the closing 2000m lap the 23-year-old World champion injected a brisker rhythm but Kisorio managed to live with his pace and the name of the winner only became clear after a fierce sprint dominated by Ebuya, timed at 29:57 for Kisorio’s 29.58.

A lonesome Lamdassem took the minor spot on the podium ahead the Eritrean pair while España concluded his climb back with a fine sixth place some 1:27 adrift the winner.

Ebuya became the first athlete to grab two victories in Soria, his previous win back in 2007. He declared: “Honestly, I didn’t know that no athlete had previously won twice here, that’s makes me tremendously happy. I love Spain. Thinking of my loss in Atapuerca two weeks ago (where he was out-sprinted by Medhin) I tried to leave Matthew (Kisorio) behind but I simply couldn’t do it until the end. He is on the right path to become a world leading athlete in the years to come.”

Dias carves out the race but Phalula prevails – Women’ race

?The pre-race favourite of the women’s 8000m contest was Gatheru Hannah Wanjiru, the unheralded Kenyan who came third at the first leg of the IAAF Cross Country Permit Series 2010/11 held in Atapuerca a fortnight ago.

However, Wanjiru could not even make the podium yesterday on a race ruled by Ana Dias. The experienced Portuguese’s relentless pace was only followed by Morató, Wanjiru, Phalula and Morocco’s Aicha Bani.

When the clock read 22:20 Phalula moved to the front and only Dias and Morató could live with her pace while Bani and Wanjiru dropped from the main group.

The key movement came with some 1000 metres left when Phalula’s second change of speed proved to be lethal for her rivals although Morató passed Dias easily and remained a threatening 15 metres behind. But there was not catching her and the South African, who will turn 27 on 9 December, romped home successful three seconds ahead of the Spaniard while the 36-year-old Dias completed the podium another four seconds adrift but herself ten seconds clear of Wanjiru.

The winner, who has a twin sister named Dinahrose Lebogang, herself an athlete who was 15th in Bydgoszcz, said: “I didn’t feel fine over the opening kilometres. In addition, I hadn’t performed well at my last outings (she was sixth at the Quintanar (ESP) XC  permit the previous weekend, 14 Nov) and so I preferred to wait and see first and only unleash my attack close to the end. Eight kilometres is a too long a distance for me at this stage of the season. Fortunately, I was able to finish strongly and I think that my rivals thought they would finally catch me which has been and advantage for me.”