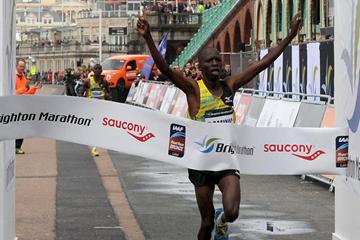 Assault on course records expected at the Brighton Marathon

Brighton Marathon organisers have put together their fastest fields ever, at least on paper, for an all-out assault on the course records at the sixth edition of the IAAF Bronze Label Road Race on Sunday 12 April.

The elite fields, announced on Thursday (12) has four men with career bests under 2:10 and two women faster than 2:28.

On the men’s side, Kenya’s Mutai Kipkemei leads the contenders.

The 28-year-old is a recent convert to the marathon but he established himself as a sub-2.10 campaigner last autumn when he finished third in Hengshui in 2:09:29.

Leting made a great debut in Enschede two years ago when he finished runner up in 2:09:34, which remains his personal best. Last September he went one better by winning the Münster event.

Another Kenyan, former Brighton champion Dominic Kangor Kimwetich will be looking to regain his title after just missing out last year and coming second. An exciting tussle in the last few miles saw him rewarded with a personal best by over a minute in 2:09:36.

There are two representatives from Ethiopia: Birhanu Bekele Berga is a former winner of the Florence Marathon who has a career best of 2:09:41 while Ketema Behailu Mamo claimed his first title in Venice last autumn when he ran away from the pack over the second half of the race.

Duncan Kipkurui Maiyo will be racing for the first time outside Kenya when he takes to the Brighton and Hove streets but if the company he keeps is anything to go by then he could surprise as he trains with an elite trio of 2:06 performers: Micah Kogo, Mark Kiptoo and Mike Kigen.

The men’s course record of 2:09:25 was set last year by Kenya’s William Chebor.

Champion in the same year as her countryman Kangor, in 2013, Eunice Kales is also making a bid to regain her title.

After winning in Brighton two years ago in a course record of 2:28:50, Kales travelled to Melbourne that autumn to establish a career best of 2:27:19 but was frustrated last year by injury.

From Bahrain comes Lishan Dula Gemgchu, the fastest amongst the elite women, her lifetime best of 2:26:56 coming when she finished third in Rotterdam four years ago.

The leading British athlete in the women’s line-up is Hayley Munn and she is aiming for a 2:34 clocking, an improvement of some three minutes over her current best.