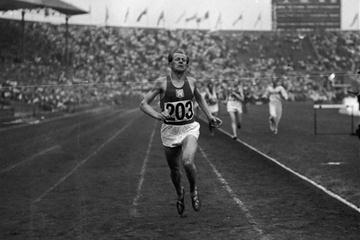 He had celebrated his 78th birthday just a short while ago, Emil Zatopek: to be more precise, on 19 September and, as he lifted his glass to toast his wife Dana – herself born on the same day, in the same year – his hands trembled making it impossible for him to bring the glass to his lips.

Once again, it was she who encouraged and helped him. For over half a century, Dana Zatopkova (née Ingrova) had been by his side. She had been there in the centre of the Olympic stadium in Helsinki on that day in the summer of 1952, during one of the most spectacular and celebrated races in the history of athletics, when her thirty-year-old husband won the 5000m in a dramatic sprint finish against the great stars of the day: Alain Mimoun, Herbert Schade, Gordon Pirie and Chris Chataway.

She was there, but not by chance: just a few minutes later, Dana Zatopkova threw the javelin 50.47 metres to win the Olympic title and for the first (and up until today, the last) time ever, a husband and wife became Olympic champions on the same day, during the same Games. However, Emil had an advantage over Dana in the medal stakes as he had already, a few days before, won gold in the 10,000 metres. But to those who asked him whether that wasn’t a good enough lead, he replied: "Two to one looks like a narrow margin to me. To put matters straight and increase my prestige there is only one thing to do: I must run and win the marathon".

And so Zatopek ran and won in 2 hours 23:03.2, more than two minutes head of the Argentinian Reinaldo Gordo and more than three ahead of the London Olympic champion Delfo Cabrera, also of Argentina. Great Britain’s Jim Peters, who only six weeks before had run the world’s best time of 2:20:42.2 held the lead for much of the race, trying to shake off the Czech by running a fast pace. In fact, the only problem for Zatopek, who had never run a marathon, was that of finding his rhythm. So it was that he ran alongside Peters and around kilometre 20, asked him in English: "The pace? It is good enough?". Peters, who was already tiring, tried to bluff him: "Pace too slow," he replied.

Zatopek thought over this reply in silence as they ran along for a while. Then he turned to Peters again: "You say, too slow. Are you sure tha pace is too slow?"

Zatopek dropped back a pace or two, lowered his head on his shoulders, grimaced and started pounding the asphalt. A few kilometres down the road, Peters had dropped back out of sight and running alongside Zatopek was Sweden’s Gustav Jansson.

As they reached a refreshment station, Zatopek saw Jansson take and eat a slice of lemon. If it is good for him, thought the Czech who was unused to eating and drinking whilst running, I will take two the next time. But by the time the next station was reached, Jansson too had dropped out of sight and so Zatopek decided that maybe the lemon was not such a good idea after all.

And so he continued to run on alone, finally relaxing his face a little and starting to wave back to the crowd who were cheering him on.

The triumphant reception he received as he entered the Olympic stadium is one of the most moving moments in the history of sport: not just for the tumultuous applause of the spectators, but also because something that nobody could have imagined happened. The Jamaican 4x400 relay team of Arthur Wint, Leslie Laing, Herbert McKinley and George Rhoden, who had just set a world record as they beat the American team, hoisted Zatopek to their shoulders and carried him on a lap of honour.

That spontaneous gesture by four exceptional, generous champions was the recognition of an exploit without precedent that has never been repeated since.

Ultimately, this was the role of Zatopek, and is that of all those who, through happenstance, find themselves a step ahead of the rest of humanity: to mark the road that must be run, bearing the fatigue and moral responsibility thrust upon them.

From the moral standpoint, Emil Zatopek was exemplary throughout his life. As a young soldier he fought for his country’s freedom and had his first experiences as an athlete in the army.

To make the most of the limited time available, he used to run the snow-covered streets at night, wearing army boots designed for the trenches and military marches. He used a pocket lamp to light his way, fearless of the traps along the way, the snow covered holes. He fell often, scraping his hands and knees, but he never stopped, never gave up. The training had to be done regardless of the pitfalls that the snow might hide on his way.

But it is not these statistics that demonstrate the value of Zatopek, but rather his ability to innovate. He was the first to make training fashionable, because he understood that the resources of the human body and willpower are immense. Maybe it was the tough live he lived as an adolescent, or the deprivation of the war years, that led him to understand that the road to peace, to reach at last true peace, meant riding a very rough road, making men and women suffer on their way to the finish line.

Zatopek invented his own form of interval training. He knew that his finishing kick was not strong enough to beat his adversaries and doubted that running a fast but regular pace would be sufficient to rid him of the other competitors, so he practised changing his pace.

He would run up to 20 kilometres in training, but in 400 metre stretches, alternating fast and slow runs. It was almost like a game, but one where there was no time to stop and enjoy the surrounding nature: Zatopek used to do his training on a dirt track, so as to be sure of the distance he was running. And more to the point, he used to train in his famous army boots, saying that this way to run a race in lighter running shoes would be like child’s play.

He used to enjoy himself and gave pleasure to millions of fans, who saw in him the man capable of defying all the old credos. The sages, from their vain heights, forecast every sort of ill befalling him: it was just not human to run so much and so fast, they believed that it would bring on a heart tumour.

In response, the then thirty-one years old Zatopek prepared for his third Olympics, the Olympic Marathon in Melbourne in 1956. He prepared for it using weight training, again long before this became common practice. But those were hard times in the cold war years and the only weight that Zatopek could find was his wife: Dana Zatopkova would climb up on his back and off Zatopek would run at great speed, the embodiment of the legend of the centaur.

But even centaurs overdo it sometimes: Zatopek suffered a hernia and had to stop training for a while, before starting again, against the doctors’ advice and in Melbourne, despite the pain, he still managed a sixth place.

This was the story of his sporting career, but it is inseparable from that of Zatopek the army officer, the defender of a just and free social system.

Zatopek put all of his enormous prestige at the service of this ideal, but in the spring of 1968, the Soviet tanks wiped away the hope of the Czechs and the Olympic gold of Zatopek.

But on a day when the world of sport, and those who remember the past, honour his memory, no-one should forget that Zatopek’s race only ended when the line of true freedom had finally been crossed.

Giorgio Reineri for the IAAF