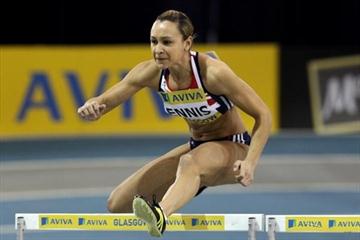 Jessica Ennis stole the show at the Aviva International Match this afternoon (30) with two fantastic performances that put her well on course for gold at the 13th IAAF World Indoor Championships in Doha, Qatar in March.

The World Heptathlon champion started with a bang in Glasgow’s Kelvin Hall, beating USA’s Lolo Jones over 60m Hurdles in 7.95sec, the fastest time in the world this year, a personal best by 0.17s and, most importantly, a hundredth of a second inside Sarah Claxton’s British record.

Ninety minutes later she all-but did it again in the High Jump as she raised her indoor personal best by two centimetres to 1.94m before just missing out on another British record at 1.96m.

“I’m in shock,” said Ennis who had already set three PBs this season before arriving in Glasgow to captain the Great Britain team against USA, Sweden, Germany and a Commonwealth Select side.

“I felt in good shape before I came here but you always worry you’re not going to perform well when everyone’s watching. But beating Lolo Jones – that’s mad! I can’t really believe it. Everything is slotting into place nicely for Doha.”

“Ennis had a great race,” said the clearly disappointed Jones who was beaten by two hundredths. “You could tell that I was getting off the plane and she was coming from next door but I’m glad she broke the record.”

In truth, though, the reigning World Indoor 60m Hurdles champion was well beaten as Ennis matched the smooth hurdling American over the barriers and powered off the last hurdle to finish comfortably in front of the USA captain.

There was another sign of the Briton’s competitive spirit in the High Jump as Ennis faced elimination following two failures at 1.92m after USA’s Chaunte Howard and Germany’s Meike Kroger had cleared. She came back with a good clearance to match her indoor best before going over 1.94 on her second attempt to finish second to Howard on count back.

To cap it all she accepted the annual team trophy at the end of the meeting as the home side beat USA in the match by three points.

Oliver and Jeter get quickly into the groove

Carmelita Jeter and David Oliver produced the best of the USA’s performances.

Oliver had a terrible start in the men’s 60m Hurdles but recovered superbly to power through the field. The 2008 Olympic 110m Hurdles bronze medallist clocked 7.58sec, a full tenth clear of his closest rival, Germany’s Helge Schwarzer.

Jeter made no mistakes to win the women’s 60m easily in 7.19sec, as both she and Oliver moved to third on this year’s world season’s lists.

Jeter was particularly happy to have run well in her first race of the year. “I just got of the plane so I’m a bit jet-lagged but I was glad to come and perform,” she said.

Jones’ defeat by Ennis wasn’t the only surprise as South Africa’s World 800m champion Mbulaeni Mulaudzi was comprehensively beaten by the 21-year-old German, Robin Schembera. The winning time wasn’t scintillating by any means, but Schembera ran an assured race and looked full of strength as he stormed home in 1:48.55. Mulaudzi looked laboured by comparison.

There were good wins for some “Commonwealth” athletes though.

Sammy Mutahi looked comfortable in the men’s 3000m. The Kenyan led from the 1km point and won easily in 8:06.85. He has his eyes on the World Indoors but admits he’ll need to improve over the next month.

And Jamaica’s Novlene Williams-Mills moved into the world top 10 with her win over 400m in 52.83. The Jamaican was making her first indoor appearance since 2006 but is also aiming to make an impact in Doha.

On today’s showing, few will make a bigger mark in Qatar than Ennis. A few people have started of talk of Ennis breaking the British (4927), or even the World Pentathlon record (4991), suggestions which she sensibly played down today.

Nevertheless, she has already been mightily impressive over the first few weeks fo the 2010 season.