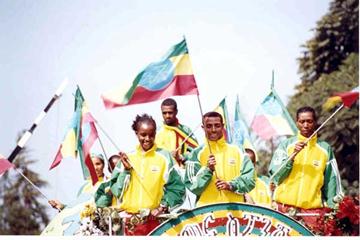 High government officials including Arkebe Equbay, the Addis Ababa city Administration mayor, and Ambassador Petros Olango, Deputy spokesperson for the House of People’s Representatives in the Ethiopian Parliament attended the ceremony which was broadcast live on National Television and Radio.

National and Regional government representatives added colour to the ceremony with showers of flowers and bouquets, while the crowd became ecstatic as the newly-crowned World 10,000m champion Kenenisa Bekele led the medallists on a lap of honor around the track.

“It means a lot to us to be appreciated like this,” said Bekele, who out sprinted two-time Olympic and four-time world 10,000m champion Haile Gebrselassie to gold on the second day in Paris.

The country’s Minister for Youth, Sports, and Culture Ambassador Teshome Toga said at the ceremony that the results in Paris made the nation proud and an indication for more to come.

“The Athletes have done the nation proud,” he said. “It is the right kind of boost the sport needed as Ethiopia prepares for the All-Africa Games and the Athens Olympics.”

Ethiopians have a long standing tradition of welcoming back their Athletes after triumphs in the Olympic Games and other major sporting events. Nearly two-million people took to the main Meskel Square two years ago when the team returned from the Sydney Olympics.