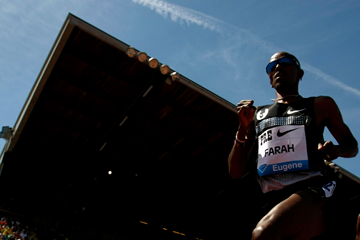 Mo Farah returns to the Prefontaine Classic 10,000m and the Olympic gold medallist will be joined by another incredibly deep field at the IAAF Diamond League meeting on 29-30 May.

Held on the eve of the main competition in Eugene, the men’s 10,000m is once again a cornerstone of ‘Distance Night’.

At the 2011 edition of the Pre Classic, Farah set a European record of 26:46.57 to win the highest quality 10,000m race in history. He was one of a record nine runners in that race to run faster than 27 minutes.

A record seven runners enter this year’s Pre Classic with PBs faster than 27 minutes – and that does not include the reigning world cross-country champion.

Josphat Bett won the Kenyan 10,000m title last year, then went on to take silver at the Commonwealth Games and bronze at the African Championships. The 2008 world junior champion set his PB of 26:48.99 when finishing third in Eugene in 2011.

Emmanuel Bett, no relation to Josphat, finished fourth in Eugene in 2012 in a race which doubled as the Kenyan Trials. He missed making the Olympic team by two seconds, but won in Brussels later that year with a world-leading 26:51.16, a time which remains his PB.

Geoffrey Kamworor of Kenya is not only the reigning world cross-country champion, but also the world half-marathon champion. Kamworor was only 18 when he ran his first 10,000m, a still-standing PB of 27:06.35 from the 2011 edition of the Prefontaine Classic.

Kenneth Kipkemoi won the African 10,000m title in 2012. Like Emmanuel Bett, he missed out on making the Kenyan Olympic team in 2012, but finished the year with a PB in Brussels, clocking 26:52.65. He then finished seventh at the 2013 World Championships.

Geoffrey Kirui was just 18 years old when he clocked his 10,000m PB of 26:55.73 in 2011, making him the second-fastest junior in history. The Kenyan won the African junior title earlier that year, and then went on to take bronze at the 2012 World Junior Championships.

Teklemariam Medhin has earned two individual medals at the IAAF World Cross Country Championships. The two-time Olympic finalist has a 10,000m PB of 27:16.69.

The top North American in the field is Cam Levins. A training partner of Farah, the Canadian took bronze at the Commonwealth Games last year. His 10,000m PB of 27:27.96 was set on his debut at the distance in 2012.

His PB of 27:28.10 might not be the fastest in the field, but Eritrea’s world and Olympic finalist Nguse Amlosom won the hotly contested African title over 10,000m last year.

World University Games champion Stephen Mokoka won both the 10,000m and 5000m at this year’s South African Championships, setting a national record of 13:11.44 in the latter. Like Sitonik, the 30-year-old will be making his US racing debut.

National half-marathon champion Diego Estrada and 13:02.80 5000m runner Hassan Mead are the two US entrants in the field.