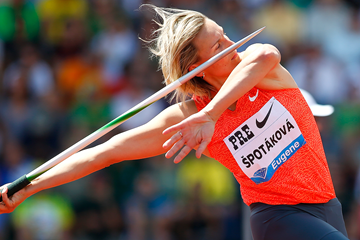 With the full set of Olympic medallists taking on the world champion, European champion and Diamond Race winner, it’s easy to see why organisers of the IAAF Diamond League meeting in Eugene are saying it’s the best women’s javelin field in Prefontaine Classic history.

Barbora Spotakova of the Czech Republic is considered the world’s best in many ways. The world record-holder at 72.28m since 2008, she owns the most Olympic medals in this event with three, led by golds in 2008 and 2012 before a bronze last summer in Rio, and she has claimed four of the event’s seven Diamond Race trophies.

Also a four-time Olympian, Sunette Viljoen took the silver medal in Rio. The South African earned World Championships bronze medals in 2015 and 2011 and holds the African record of 69.35m.

Sara Kolak was the surprise winner in Rio last year. The 21-year-old Croatian smashed her own national record to take Olympic gold with 66.18m. Her last appearance in Eugene came when she took the bronze medal at the 2014 IAAF World U20 Championships.

Katharina Molitor won the world title in 2015 with a PB of 67.69m. The German will be making her first Pre Classic appearance.

Tatsiana Khaladovich won the European title last summer in Amsterdam with a PB of 66.34m before going on to finish fifth at the Olympic Games.

Madara Palameika won last year’s Diamond Race and, like Spotakova, will be competing at her fifth Pre Classic. She has owned the Latvian record since 2009 and last year extended it to 66.18m when winning at the IAAF Diamond League final in Brussels.

Kathryn Mitchell is a two-Olympic finalist who will be making her first Pre Classic appearance.

The eighth and final position in the field will go to the top US javelin thrower this spring.