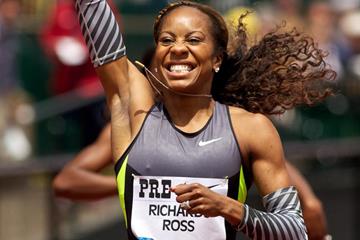 Athletes who have won major titles and Diamond Race trophies lead a pair of one-lap fields at the Prefontaine Classic, the next leg of the IAAF Diamond League which is being held in Eugene on 31 May.

That group includes US record-holder Sanya Richards-Ross in the 400m and Kaliese Spencer of Jamaica in the 400m hurdles.

Olympic champion Richards-Ross is a five-time Pre Classic winner. She is rebounding from foot surgery that kept her out of action for almost all of last year, but at the IAAF World Relays last weekend she ran the second-fastest split on the US 4x400m team.

Amantla Montsho, the 2011 world champion, has won the Diamond Trophy in the 400m on three occasions. Having won twice in Eugene before, she will be seeking a third victory this weekend.

World indoor champion Francena McCorory was the top US finisher at last year’s IAAF World Championships and she will be looking to maintain that mantle in Eugene.

Novlene Williams-Mills is one of two world-class Jamaicans in the field with sub-50-second PBs. The 2007 world bronze medallist won at the IAAF Diamond League meeting in Shanghai and will be joined in Eugene by Stephenie Ann McPherson, who finished just out of the medals at last year’s Moscow World Championships.

Although Jamaica’s Kaliese Spencer has never won a medal in her specialist event at a senior global championship, she is a former world junior champion and more recently took the silver medal in the 400m at the World Indoor Championships. She also won the first three IAAF Diamond Trophies.

A quartet of US women are also in the field, led by US champion Dalilah Muhammad, who earned silver at last year’s World Championships. Kori Carter set a collegiate record of 53.21 when winning the NCAA Championships last year, recording the second-fastest time in the world in 2013.

Olympic finalist Georganne Moline has a PB of 53.72, set when finishing second to Carter at last year’s NCAA Championships. Two-time world finalist Tiffany Williams, twice a US champion, has the third-fastest PB of the field with 53.28.

Rounding out the field are European silver medallist Denisa Rosolova of the Czech Republic and Italian record-holder Yadisleidy Pedroso.