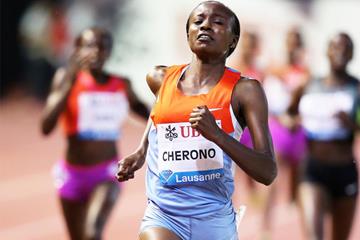 A new wave of the world’s best distance runners seeks to run the fastest women’s two miles ever on US soil at the IAAF Diamond League meeting in Eugene on 30-31 May. Most are young, and all will be the first women to race an American classic distance at the Prefontaine Classic at Hayward Field.

The two-mile field is led by several distance-rich countries – especially Kenya and Ethiopia – whose athletes could possibly better the US all-comers’ record of 9:10.47, set by Ethiopia’s Meseret Defar in 2007. Given the right conditions, the field could even challenge the world best of 8:58.58 set by Defar later that same year.

Mercy Cherono is a new-wave runner. The 23-year-old Kenyan earned silver last year in the 5000m at the IAAF World Championships, but is no stranger to winning gold, having won one world youth and two world junior 3000m titles on the track, as well as a world junior cross-country title.

Last week she set a 3000m PB of 8:21.14 at the IAAF Diamond League meeting in Doha, moving to sixth on the world all-time list and becoming the second-fastest African of all time. In that race she finished half a second behind Hellen Obiri, who broke the African record and will run the 1500m in Eugene.

Ethiopia’s Almaz Ayana, only 22, is already a world bronze medallist, from the 5000m in Moscow last year. The world junior steeplechase record-holder smashed her 3000m flat PB in Doha last weekend with 8:24.58, just 0.07 shy of the Ethiopian record.

One of the race favourites lives and trains in Eugene. Sally Kipyego won silver medals at the London Olympics and 2011 World Championships in the 10,000m, but she also knows how to step on the pedal in shorter distances, finishing second in the 3000m in Eugene two years ago with a PB of 8:35.89.

More than a decade ago, Viola Kibiwot won three global junior titles – two in cross-country and one on the track – but the Kenyan continues to go from strength to strength. Last year she finished fourth in the 5000m at the World Championships and in Doha last week she smashed her 3000m PB with 8:24.41. She also has the fastest two-mile PB of the field with 9:18.26.

Another global medallist, Belaynesh Oljira, is also in the field. The Ethiopian took bronze in the 10,000m at last year’s World Championships, but will step down in distance in Eugene.

European under-23 cross-country champion Sifan Hassan is still only 21 but has recorded impressive PBs across a range of distances. She could even challenge the European two-mile best of 9:19.56 set by Sonia O’Sullivan in 1998.