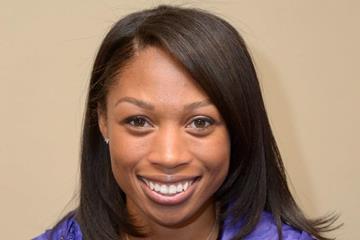 Allyson Felix at the press conference ahead of the 2013 IAAF Diamond League meeting in Eugene (Kirby Lee) © Copyright
31 MAY 2013 General News Eugene, USA

Although Prefontaine Classic meeting director Tom Jordan’s opening statement was the news that London 2012 Olympic Games champions Aries Merritt and David Rudisha had sadly had to scratch from the IAAF Diamond League meeting, the assembled cast of world class athletes soon turned the focus to a positive light on Friday (31).

Allyson Felix, who has earned 8 IAAF World Championships title and 4 Olympic Games gold medals was her usual effervescent self. All that success, it seems, has not dampened her motivation in the least.

“I love what I do,” declared the 2012 Olympic Games 200m champion. “I am super competitive. I felt this year was a little different coming off the Olympic year it was a little harder to get back into the swing of things. I took a little more time off, but once I got back into the real training and started competing it came back, that competitive nature. Being a World championship year made it a little bit easier.”

She will compete in the women’s 100m on Saturday against a very strong field. Having made a successful transition to the 100m last year with a personal best of 10.89, the 27 year old laughed when asked ‘what are you?’

“I know......what am I?” she responded. “Well this year I am staying in the sprints. My focus in the 100-200. I feel I am in my prime right now coming off last year and feeling confident. I really want to take advantage of being in this place and lower my personal bests in the sprints.”

US distance runner Galen Rupp was also surrounded by reporters and cameras.

Growing up in Portland and attending the University of Oregon, for which Hayward Field is the home track, Rupp will be a crowd favourite when he runs in the 5000m tomorrow, against British training partner and double 2012 Olympic Games gold medallist Mo Farah.

The 2012 Olympic 10000m silver medalist behind Farah is well acquainted with the IAAF Diamond League meeting in Eugene having run it several times in the past.

“The Pre Classic is always a great meet,” said Rupp. “I just remember being a younger kid falling love with track and field and the world class athletes here. The state (high school) meet was always on Friday/Saturday and the Pre was on Sunday. I would sit down and watch the guys. I just remember being in awe of the guys. I was always fond of this meet. It’s something really special and I look forward to it every year.”

When asked if the addition of his training partner double Olympic champion Farah, who was originally entered in the 10000m, was going to make a difference to how he tackles the 5000m race he was slightly nonplussed.

“Mo is another guy who can close really well,” explained Rupp. “He’s probably the best closer of all those guys in the race. For me it doesn’t change much.”

Sanya Richards won the Pre Classic 400m a year ago and then went on to win the Olympic gold medal over one lap of the track last summer.

The Texan understands the task ahead especially after being forced to withdraw from the IAAF Diamond League meeting in New York a week ago after toe, which was operated on last September, had been causing tremendous pain.

“The field is phenomenal,” said Richards. “With myself ,and Christine (Ohuruogo) and Amantle (Montsho) as the last two Olympic champions and the defending World champion, and Dee Dee (Trotter) and Francena McCorory. I think the Pre always is able to put on a great meet with great athletes in all the events. So I am not surprised that it’s a great field.

“I am not 100 per cent sure what to expect for tomorrow. It’s my first race and we will see how my toe reacts and everything,  but I am excited to be competing and to see where I am at to get ready for nationals.”

A victory over a world class field would be something special and give her a psychological boost over her rivals.

“Yes, big time,” she added, laughing. “I won here in 49.43 going into the 2012 Olympics. This race does help to add your confidence especially in a big year like the Olympics. I do hope to win here but it’s a different year this year. I didn’t have the perfect fall that I did before 2012 I have a really painful big toe. Whichever way it goes I am going to use it as a positive.”

Dibaba and Lavillenie looking to make a big impression

A week ago three time Olympic champion Tirunesh Dibaba won the Great Manchester Run 10k in 30:48 and set a course record. She makes her 2013 track debut over 5000m in Eugene.

“I have run really well in Manchester and tomorrow, if the pacemakers are good, I plan to run very fast, to break the meet record of 14:32,” said the World record holder at 14:11.15.

“I missed about two months of training last year, I had a problem on my inner foot. This year I have recovered well and have done a lot of training. I am in good condition now.”

“I think with good conditions I should be over 5,80m.” Three of his rivals have cleared 5,80m this season already but Lavillenie seemed unimpressed with their performances.

“The guys who jumped over 5.80m jumped in very good conditions so it was very helpful to go high. It’s very early in the season; I want to see how they are able to jump at the end of June or July, the important time for preparation for Worlds.

“If they are able to jump again 5.80m I think it can be very interesting for the fight for the worlds. First we will see tomorrow. Many guys have jumped 580m.”

Lavillenie has obviously done his homework about the Prefontaine meeting.

“It’s not just about LaShawn,” said James, “the whole field is talented. Having that field always competing against each other is ultimately good for the sport. The good thing about the guys in my event is that we don’t shy away from each other, Every time we go out there we want to put on a great performance for the fans.”