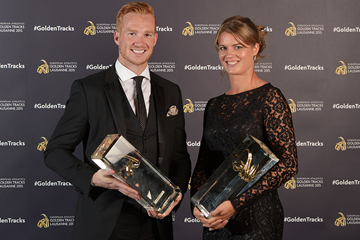 Schippers and Rutherford crowned European athletes of the year

At the annual Golden Track Awards in Lausanne on Saturday (17), Dafne Schippers of the Netherlands and Britain’s Greg Rutherford were crowned European female and male athletes of the year 2015.

Schippers is the first female athlete to retain the title, having won the trophy in 2014. Following her outstanding 2015 season, which started with European indoor 60m gold and uncertainty whether to focus on the sprints or the heptathlon, the 23-year-old delivered one of the stand-out performances of the IAAF World Championships, Beijing 2015 when taking 200m gold in 21.63.

Her time was a European record, the fastest time in 17 years and third fastest in history. The performance followed after the Dutchwoman took 100m silver only four days prior.

In 2016, Schippers has the European Championships in her home country to look forward to, which she sees as a vital stepping stone ahead of Rio. When asked about her ambitions, Olympic gold or potentially a world record, she is clear: “There is one medal to go and that is the gold medal – that is the goal for next year.”

Rutherford this year completed a feat only four other Brits had achieved before him, holding all four major titles – Olympic, world, European and Commonwealth – at the same time.

The 28-year-old leapt a season’s best of 8.41m at the IAAF World Championships in August before a week later heading to Switzerland to win the Diamond Race trophy for the first time in his career.

Despite possessing a trophy cabinet others can only dream of, he insisted he wasn’t struggling for motivation: “I am motivated by winning,” he said at the press conference the day after the gala. “That’s what gets me out of bed in the morning. There are plenty more things I’ll try to win.

“Sitting here, I realise I am very old. I have 10 years on certain people here. I’ve been around for a long time and I am looking to use that experience more than anything else to continue winning titles.”

He completed the season, which saw him break the world junior indoor record with the 6kg shot, by setting an outdoor world junior best of 20.78m with the senior implement in September.

There was a triumph for the host nation in the female Rising Star category with sprint hurdler Noemi Zbären taking the trophy. The Swiss sprint hurdler became European under-23 champion in July, recording a personal best of 12.71, before finishing sixth at the IAAF World Championships in Beijing in August.