Evolution of Olympic Women's Athletics, 1928 to the present day

The Games of the XXIX Olympiad, Beijing 2008, and the athletics events of which take place from Friday 15 August to Sunday 24 August, will mark the 80th Anniversary of women entering the athletics programme of the Olympic Games.

Mel Watman summarises the evolution of women’s athletics in the Olympics from those 1928 Amsterdam Games to the present day.

Although women took part in Olympic competition in golf, tennis and sailing back in 1900, while archery was introduced in 1904 with swimming and diving from 1912, it wasn't until the Amsterdam Games of 1928 that female track and field athletes were admitted – and even then it was a half-hearted gesture. There were just five events on the programme (100m, 800m, 4x100m relay, High Jump and Discus Throw), compared to 22 men's disciplines. The Women's AAA, founded in 1922, was so disgusted by this token offering that it declined to send a British team.

There was a strong antipathy to women's athletics at that time by many influential men in the sport. Even 1924 Olympic 100m champion Harold Abrahams, who later championed women's participation, wrote: "I do not consider that women are built for really violent exercise of the kind that is the essence of competition. One has only to see them practising to realise how awkward they are on the running track." He could never have envisaged that one day women would run faster or Long Jump further than himself!

Unfortunately those Games of 80 years ago are best remembered for the hysterical reaction to the 800m. Lina Radke of Germany won in 2:16.8, which stood as the official IAAF World record until 1944, but because a few of the contestants were seen to be in some distress at the finish the event was deemed inappropriate for women and it did not reappear on the Olympic schedule until 1960.

The first female Olympic superstar in athletics was the Texan all-rounder Mildred "Babe" Didrikson, who contested eight events in one afternoon at the US Olympic Trials but was restricted by some arcane rule to just three at the 1932 Games in Los Angeles. She thrilled the home fans by winning the 80m Hurdles in a World record 11.7sec and the Javelin with a throw of 43.69m, while in the High Jump both she and team-mate Jean Shiley cleared the World record height of 1.65m with Shiley taking the gold medal after a jump-off.

Didrikson, still the only athlete in Olympic history to win running, jumping and throwing medals, later took up golf and as "Babe" Zaharias became the most successful female player of all time. She was voted the greatest sportswoman of the first half of the 20th century.

While Jesse Owens was the undoubted star of the 1936 Olympics, another American – a 1.83m (6ft) tall farmgirl by the name of Helen Stephens – was the dominant figure on the women's side. She ran a wind assisted 11.4 in her 100m heat, won the final by a two-metre margin in a windy 11.5 and anchored her team to relay victory. Stephens, whose experiences in Berlin included repelling the advances of Adolf Hitler, went through the whole of her sprinting career undefeated.

Placing an unnoticed equal sixth in the Berlin High Jump was 18-year-old Francina Koen of the Netherlands. Twelve years later, as Fanny Blankers-Koen, she would become the first woman to win four gold medals in a single Games, and had she competed in the High Jump and Long Jump, for which she was also entered as World record holder, it's feasible she could have gone home with six golds!

What really motivated "The Flying Dutchwoman" as she prepared for the 1948 Games in London was the printed comment of British team manager Jack Crump that she was too old to win.

"It was just the thing to rouse me, to make me go out there and prove to them that, even if I was 30 years old and the mother of two children, I could still be a champion."

And how she proved it. She started by taking the 100m on a slow cinder track by a margin of nearly three metres in 11.9, staggered over the line inches ahead of Britain's Maureen Gardner in 11.2 after a titanic battle in the 80m Hurdles, won the 200m in 24.4 by the ludicrous margin of six metres, and finally took her team from fourth to first on the anchor leg of the relay.

Sprinters continued to catch the eye at the next three editions of the Games: Australia's Marjorie Jackson (11.5/23.7) in Helsinki in 1952 and Betty Cuthbert (11.5/23.4) on home ground in Melbourne in 1956, followed by that most graceful of speedsters, the USA's Wilma Rudolph (11.0w/24.0), in Rome in 1960. Cuthbert returned to capture the 400m title in 1964 in 52.0 but the queen of those Games in Tokyo was Britain's glamour girl Mary Rand who not only won the Long Jump with a World record 6.76 but also placed second to Irina Press (USSR) in the Pentathlon and completed her set of medals with bronze in the 4x100m relay.

Second in the 200m and Long Jump in Tokyo, and a gold medallist in the relay, was an 18-year-old Russian-born Pole, Irena Kirszenstein, who under her married name of Szewinska would develop into one of the greatest of all Olympians.

At high altitude Mexico City in 1968 she won the 200m in a World record 22.5 and achieved the ultimate again in Montreal in 1976, this time at 400m, when triumphing by a ten metre margin in 49.29, smashing her own World record of 49.75. Szewinska "only" managed a bronze at 200m in 1972 in Munich, where West Germany's Heide Rosendahl not only won the Long Jump and finished just ten points behind Britain's Mary Peters in a nail-biting World record breaking Pentathlon duel but also held off her GDR opponent to win the relay for the Federal Republic in a World record 42.81.

Without Soviet and East German opposition, Americans captured seven titles in Los Angeles in 1984, perhaps the most significant being Joan Benoit's iconic success in the inaugural Olympic Marathon for women (2:24:52). Four years later in Seoul, sisters-in-law Florence Griffith Joyner and Jackie Joyner-Kersee accounted for five victories. Flo Jo, who was to die at just 38, smiled her way to an incredible sprint double in 10.54w and World record 21.34 as well as contributing a 48.08 leg for silver in the 4x400m relay, while JJK set a still unapproached world Heptathlon record of 7291 and came back to win the Long Jump (7.40) also. JJK defended her Heptathlon title in Barcelona in 1992 (7044).

Nonetheless, Ottey – who now represents Slovenia – merits an honoured place in Olympic history as she has gained more medals (eight) than any other woman, and that will become nine if, following the annulment of Marion Jones' performances in Sydney 2000, her fourth place at 100m is upgraded to a bronze medal. With Jones retrospectively disgraced, the outstanding performer in Sydney was Cathy Freeman, who overcame immense pressure as a result of Australia's expectations to strike gold at 400m in 49.11.

Another who saw her dreams become reality was Britain's 34 year-old Kelly Holmes in Athens four years ago. After so many years of frustration due to injuries she finally came good by winning the 800m in 1:56.38, her look of incredulity as she crossed the line an unforgettable image, and as if that were not enough she returned to kick to victory in the 1500m in her fastest ever time of 3:57.90. Her ambitions fulfilled, she retired soon afterwards but the other glittering star of Athens, Russia's Yelena Isinbayeva, who pole vaulted 4.91 for a World record, has recently raised the record to 5.03 and will be one of the great attractions in Beijing. She symbolises the female athlete of today, as committed and talented as any of their male counterparts.

Mel Watman for the IAAF

To mark the 80th Anniversary, the IAAF is staging a Photo Exhibition in the latter half of the current season, which will depict some of the memorable moments for women’s athletics in the Olympics Games.

The exhibition will be on show to the public in the host cities of ÅF Golden League meeting, Brussels, Belgium (5 September), the IAAF / VTB Bank World Athletics Final, Stuttgart, Germany (13-14 September), and the IAF World Athletics Gala, Monaco (23 November).

BACK
Pages related to this articleDisciplines
10 Kilometres Race Walk 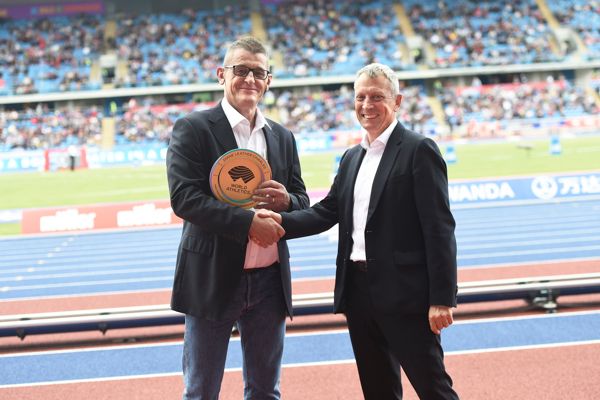