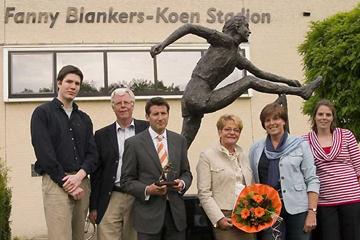 Outside the FKB Stadium in Hengelo, which will play host to the Thales FKB-Games, an IAAF Grand Prix status meeting as part of the IAAF World Athletics Tour 2007, on Saturday 26 May 2007, a statue was unveiled yesterday (9) to commemorate the life and achievements of ‘FKB’ - Fanny Blankers-Koen.

This is the latest honour to be bestowed on Fanny Blankers-Koen (NED), the IAAF Athlete of the Century, at the 2004 edition of the Hengelo Grand Prix she was posthumously awarded with the IAAF Golden Order of Merit, the sport's world governing body's highest honour.

The 2 metres high bronze statue which depicts Blankers-Koen hurdling was made by Antoinette Ruiter, a local artist, and was unveiled by Fanny’s son Jan Blankers and Lord Sebastian Coe, a two-time Olympic 1500m champion and multiple World record breaker, who is now an IAAF Council Member and head of the 2012 London Olympic Organising Committee.

Fanny (Francisca) Blankers-Koen of Holland was the first Queen of women's athletics. Born in Amsterdam in 1918, she made her first appearance in the Olympics in 1936, aged 18, finishing fifth equal in the High Jump and outright fifth in the 4x100m relay. She was then deprived of two Olympic chances as World War II wiped out the 1940 and 1944 Games.

However, she made up for that in the 1948 Games in London, winning no less than four gold medals: 100 and 200m, 80m Hurdles and 4x100m relay. By then 30 and a mother of two, Fanny competed eleven times (heats and finals) in the space of eight days - and never lost.

She thus became the female equivalent of Jesse Owens, who won exactly as many events in Berlin twelve years before. Throughout that memorable campaign at Wembley Stadium, Fanny was extended only twice, first in the Hurdles by Maureen Gardner of Great Britain, who was also coached by Fanny's husband, former triple jumper Jan Blankers; then in the sprint relay when she had to make up a huge deficit on the anchor leg.

Upon her return to Amsterdam, Fanny was treated to a large parade. Seated with her husband in an open coach drawn by four white horses, she was mildly bemused by the general excitement. She kept saying: "All I did was win some foot races."

During her career, which spanned nearly two decades, Fanny set a range of World records covering flat sprint and Hurdles, High Jump and Long Jump, as well as the Pentathlon. She also won five European titles.