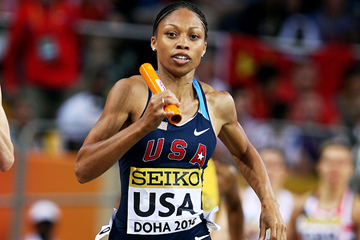 US stars Allyson Felix and Jason Richardson have both confirmed that they are targeting making the host nation's team for the IAAF World Indoor Championships Portland 2016.

Both athletes have been in the host city of the next World Indoor Championships – which will be held from 18-20 March with the pole vault competitions the day before on 17 March –  for the past few days; firstly taking part in the production of a promotional video and then speaking to the local media.

Four-time Olympic gold medallist Felix, who added the world 400m gold medal to her extensive list of accolades just over six weeks ago, said that she was examining “what makes sense for the World Indoors”.

By her own admission, she has usually used the indoor season as a training and preparation period for her outdoor campaigns.

However, she has competed at the IAAF World Indoor Championships twice before – in 2003 as a 17-year-old when she made the semi-finals of the 200m and in 2010 when she was part of the USA’s victorious 4x400m team – and has given the championships a much higher priority this time around owing to it being on US soil for the first time since the inaugural edition of the event in 1987.

"I'm very excited about this event, and that it is here," she said. "I think it's about time."

What event she will choose to contest next March is still undecided.

Richardson looking to turn back the clock

Richardson’s event is far more clear-cut. The 2011 world 110m hurdles champion will try to qualify for his first World Indoor Championships in the 60m hurdles.

"The plan is to do World Indoors," he said. "But of course, the biggest goal of the year is the Olympics."

Richardson has a best of 7.53 at the indoor discipline but that dates from his collegiate days back in 2008 and just making the US team will be a hard job, given the depth of talent in the USA over the barriers.

Nevertheless, if he can get back to the sort of form he showed seven years ago then Richardson potentially can be a medal contender in Portland.

Despite not qualifying for the IAAF World Championships Beijing 2015 after finishing only sixth at the highly competitive US Championships, Richardson ran a season's best of 13.12 in the semi-finals in nearby Eugene for ninth on the 2015 world list.

He also had a big win at the IAAF Diamond League meeting in London last summer so the notion that the 2011 world champion outdoors could go all the way to the Portland podium is a far from absurd.

Richardson added that both athletes had a lot of fun in front of the cameras on Monday.

"I had to get my inner-Denzel Washington on," joked Richardson. "In between takes, every now and then I had to ask myself, ‘What would Meryl (Streep) do?’"

President of the Portland 2016 local organising committee, Vin Lananna, was highly optimistic that the championships will be a major success and leave a lasting legacy on US and global athletics.

"This is moving at a fast pace," said Lananna on Tuesday. "We're five months out, and there is a tremendous amount of buzz globally about this event."

Lananna said more than half of the available tickets for the championships have already been sold.

To this point, fans only have been able to purchase ticket packages for all three days of competition in the Oregon Convention Centre, which has a seating capacity of 7500, but single-session tickets will go on sale early in January 2016.