Felix, Rutherford and Sanchez among Olympic medallists in Manchester

Allyson Felix, the 2012 IAAF World Female Athlete of the Year, along with another eight past and present Olympic medallists will compete at the BT Great CityGames Manchester on Saturday (25).

Felix won the 200m title at the London Games last year, finally banishing her demons on her third attempt to become the Olympic champion. She followed that success as a member of USA's triumphant 4x100m and 4x400m relay quartets, and became one of only six athletes to win three or more gold medals at an Olympics.

The 27-year-old, who won the 200m in Beijing on Tuesday in 22.36, is looking forward to her third visit to the street meeting where she set the world 200m best performance on a straight track in 2011.

Unfortunately her clash with  two-time Olympic 100m champion Shelly-Ann Fraser-Pryce has been cancelled after the Jamaican was forced to withdraw at short notice with a hamstring injury, after aggravating it at last Saturday's Diamond League fixture in Shanghai.

“We’re a little bit excited about this over 150m on the streets of Manchester,” tweeted Felix from the Chinese capital where Felix was making her season debut at her speciality distance.

The men's 150m also promises to be a highly competitive clash between Europe’s No.1 sprinter Christophe Lemaitre of France and Britain’s Dwain Chambers, making his season debut, alongside fellow London Olympian James Ellington.

The expected capacity crowd, who are able to spectate for free, will also have the opportunity to watch long jumper Greg Rutherford, who gained his Olympic gold medal in London on the nation's never-to-be-forgotten “Super Saturday”.

Returning from an early season tour of the Far East which has taken him to Australia and China, Rutherford faces rival Chris Tomlinson, UK indoor champion Matthew Burton and Rudon Bastian of The Bahamas.

Elsewhere, Felix Sanchez – who emotionally regained the Olympic 400m Hurdles title in London – will step down to half that distance in a clash against World bronze medallist LJ Van Zyl. Taking them on will be Great Britain’s Jack Green and Andy Turner. 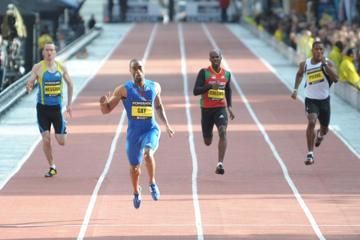 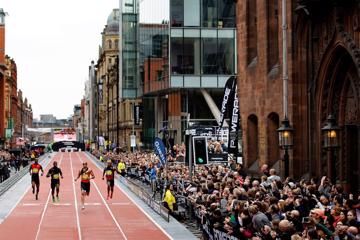 Spearmon and Richards-Ross shine on the stree...