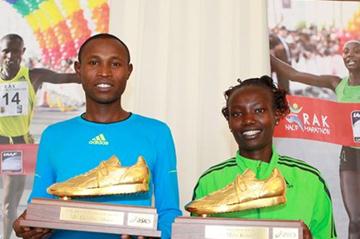 In 2011 Mutai, 30, became the first person in history to win the Boston and New York marathons in the same year with record times in both. He won the Boston Marathon in the fastest time ever recorded for a Marathon at 2:03:02, almost three minutes faster than the course record. However, due to wind assistance and overall drop on the point to point course this time could not be ratified as a World record. Mutai returned to Boston in June to compete in the inaugural B.A.A. 10km where he won in a personal best of 27:19. In November Mutai won the New York City Marathon in a course record time of 2:05:06, slicing 2 minutes and 37 seconds off the venerable event’s 10-year old course record.

Keitany joins a very exclusive club with her second AIMS/ASICS World Athlete of the Year award, her first coming in 2009. She is one of five female athletes who have won the award more than once. The others are Lornah Kiplagat (NED, 2 wins), Paula Radcliffe (GBR, 3 wins), Tegla Loroupe (KEN, 4 wins) and Uta Pippig (GER, 2 wins).

Keitany began 2011 in blistering form, winning the Ras Al Khaimah Half Marathon in a World record time of 1:05:50. In March she won the London Marathon in a personal best time of 2:19:19, making her the fourth fastest woman at that time over the marathon distance behind only Radcliffe, Catherine Ndereba and Mizuki Noguchi.

AIMS President Paco Borao said, “It is an honour for AIMS to recognise these fantastic athletes with the AIMS/ASICS World Athlete of the Year Award. Both Geoffrey and Mary demonstrated exceptional form last year.”

“I am honoured to win this prestigious award," Mutai said. "I know how many great Kenyan athletes have won it in the past and it is a great honour to be in the same company.”

“To be named as AIMS/ASICS World Athlete of the Year for a second time in my career is an incredible honor," Keitany said. "I would like to extend my sincere thanks to AIMS for their support and award sponsors ASICS for this prestigious award.”