Gay cramps up and will miss Beijing 200m - US Olympic Trials, Day 7

Eugene, Oregon, USAOvershadowing everything that happened today on the seventh day of the U.S. Olympic Trials (5 July) was the fact that some 30 metres into the first quarter final of the men’s 200 metres Tyson Gay crumpled to the track clutching his left hamstring – out of the Trials – and out of the Olympic 200.

The World champion was succinctly and understandably - "very disappointed."

To quote USATF - "Approximately an hour after Gay was wheeled off the track, his agent, Mark Wetmore, reported that Gay had suffered a severe cramp in the race after feeling some tightness in his hamstring while warming up. There was no other damage apparent, though Gay continues to be evaluated."

Tyson Gay underwent an MRI late Saturday afternoon at Slocum Center for Orthopedics and Sports Medicine in Eugene. The MRI showed a mild strain in the semitendinosus muscle. He is expected to engage in "active rest" for up to 12-14 days, with light physical activity increasing through that period, and then resume training. Tyson's only confirmed pre-Olympic competition is the 100 metres at the Aviva London Grand Prix on July 25, and that is still on the schedule.

Even with Gay absent, the semi-finals of the 200s were in many ways the highlights of the day’s action. In the first men's semi, slightly wind-aided at +2.2, Rodney Martin outleaned Wallace Spearmon and Walter Dix, 20.04 to 20.05 and 20.09, with Charles Clark fourth in 20.48. The second was won by 2004 Olympic champion Shawn Crawford, who appears to want to defend that title, by more than three metres in an eased-up 20.21 (-0.9). Behind him were Xavier Carter, Rubin Williams and Bernard Williams.

The women’s 200 semis were perhaps even more dazzling. Junior Bianca Knight won the first one in 22.53 (-0.1), with Marshevet Hooker, Lauryn Williams and Torri Edwards all close. In the second, Allyson Felix blazed a 22.22 (0.0) to edge Muna Lee (22,33) with Shalonda Solomon and Carmelita Jeter also advancing.

"It was good,” said two-time World champion Felix. “I came out strong in the first 150 meters, so I could see where I was. I felt comfortable at that point and knew I had to maintain. I know there is more left in there, so I'm really excited about tomorrow's final."

Anthony Famiglietti won the men’s 3000m Steeplechase final, leading every step of the way to cross the finish line in 8:20.24. Billy Nelson closed fast to take second from Josh McAdams, 8:21.47 to 8:21.99. Steve Slattery took a spill into the water jump early in the race and did not finish.

Jesse Williams won the men’s High Jump with a clean sheet through 2.30m, and he was followed by Andra Manson and Jamie Nieto at 2.27. Fourth and fifth, also at 2.27, were Cedric Norman and Keith Moffatt. But, since Nieto does not have a timely Olympic “A” standard, the third spot on the Olympic team had to be settled by a jump-off at 2.27 between two jumpers who were tied at sixth place (but who had cleared the Olympic “A” standard of 2.30m).  They were Scott Sellers and Dusty Jonas, and Jonas cleared it on his first try while Sellers missed, and this Jonas will compete in Beijing.

Carter makes it a family affair

Two women’s throws were also settled today. Michelle Carter, daughter of 1984 Olympic men’s shot put silver medallist, joined her father as an Olympian by winning the women’s Shot with a PB of 18.85, with three of her puts good enough to win. Second was Kristin Heaston at 18.34, with Jill Camerena third at 18.12. The women’s Hammer Throw was won by Jessica Cosby with  a best of 70.72m, ahead of Amber Campbell (69.24) and Sarah Veress (68.60).

"This let me know what I can accomplish in the future,” said Shot winner Carter. “I put pressure on myself. I wanted to perform well and make the Olympic Team. (My dad) always knew I could make it. Being so young, there are things to learn, things I need to do well. I'm getting it."

And on her following her father to the Olympics… "It's a great feeling. There are not too many combos like this…."He tells me about the difference competing in the U.S. and competing overseas."

No Beijing for injured Johnson

The men’s 110m Hurdles quarters were similarly quick. Heat One was taken by Anwar Moore from 2007 Worlds bronze medallist David Payne, 13.17 to 13.22 (+1.5); Two was won by Antwon Hicks over Aries Merritt, 13.28 to 13.38 (+2.1); and Three by David Oliver over two-time Olympic silver medallist Terrence Trammel, 13.07 to 13.38 (+2.0), with Dominique dq’d for a false start. In the (earlier today) first round, four-time World champion Allen Johnson did not finish in his heat because of a leg injury, therefore the 1996 Olympic champion will not make the Beijing team.

James Dunaway for the IAAF 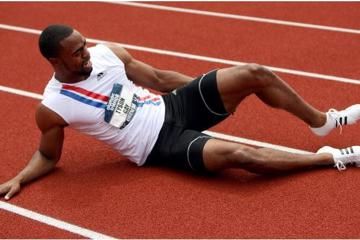