Gay conclusively demonstrated that right now he is the fastest American not on wheels when he ran away from a great field to cross the line in 9.68. Yes, it was wind-aided – very wind-aided at 4.1 metres/second -- but nobody who saw it could doubt that Gay, the World champion is ready to defend his position as the world’s number one sprinter this Olympic summer.

The previous all-time-under-any-conditions mark was the 9.69 run by Obadele Thompson in April 1996 in El Paso, Texas where the aiding wind was 5m/s.

"I just tried to stay relaxed and run through the finish line. I just wanted to make the team, but I can tell when the wind started to pick up when I got into the blocks. I've been running track long enough to know when the wind is going to be over 2.0."

Phillips and Mack will not defend in Beijing

Olympic team berths were determined in a number of other events today. Most notable was the elimination of 2004 Olympic men’s Long Jump champion Dwight Phillips by virtual unknown Trevell Quinley, who won the event with a last-round personal best of 8.36m (+1.6), leaving Brian Johnson (8.30) and Miguel Pate (8.22) in the dust but still on the U.S. team, and Phillips, at 8.20,  just in the dust.

"I just had to shake the cobwebs off during the first couple of jumps and I was able to relax a little bit after the second jump, but then I had two fouls and then made the fifth jump and put some pressure on the guys," said Quinley. "Really, I have never been so scared though after that fifth jump because you have the former Olympic champion and you can never count him out."

The women's Triple Jump saw two-time defending US champion Shani Marks win with a 14.38m (+1.4m/s) performance, with Shakeema Welsch second with 14.27m (+3.5mps) and 2005 USA champion Erica McClain was third with 13.96m (+0.4mps). Only Marks and McClain will represent the USA at the Olympics, as Welsch doesn’t hold the ‘A’ standard with a legal wind.

Three-time champion Aretha Thurmond out last year on maternity leave won the women’s Discus Throw decisively with a second-round toss of 65.20m. American record holder Suzy Powell-Roos was second (62.92m) and Stephanie Brown Trafton was third (62.65m) and will join her in Beijing.

Wariner and Merritt go through with ease

LaShawn Merritt was the fastest of the 400m quarter finalists (45.30) winning heat 1, with World and Olympic champion Jeremy Wariner the winner of the second race (46.04).

- see ' Related Content' under the main photograph - for the link to the Decathlon summary.


James Dunaway for the IAAF 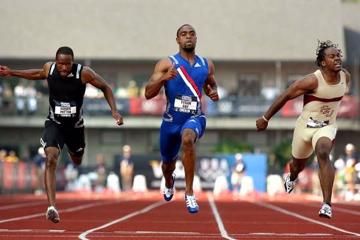