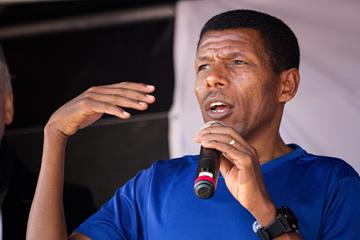 Haile Gebrselassie addressing participants at the inaugural WHO &#39;Walk the Talk: Health for All Challenge in Geneva (Bob Ramsak) © Copyright
20 MAY 2018 General News Geneva, Switzerland

Marathon legend Haile Gebrselassie helped inaugurate the World Health Organisation’s (WHO) “Walk the Talk: Health for All Challenge” in Geneva today (20), a global movement to promote health and, particularly, physical activity as part of a healthy sustainable future.

The event, organised as part of the celebrations of the WHO's 70th anniversary and staged on the eve of its 71st World Health Assembly, was the brainchild of WHO Director-General Dr. Tedros Adhanom Ghebreyesus, whose aims include raising the profile and awareness of the work and goals of the organisation, to engage some of the World Health Assembly delegates from the WHO’s 194 member states who have converged this week on Geneva, and to introduce the event as an annual gathering.

“Being physically active is one of the most important ways to stay healthy and prevent disease," Ghebreyesus said. "Having Haile Gebrselassie join us for the Walk the Talk: The Health for All Challenge is a great honour. His participation sends a powerful message about the role that physical activity can play for all people to improve their health.”

Participants were able to take part in walks or runs of three, five and eight kilometres. With mostly clear sunny skies and ideal late spring temperatures, several thousand answered the call. Those choosing the longer had the added bonus of running alongside Gebrselassie through the parks that hug the city’s international district.

"I don't want to talk more than walk, but I want to give you a tip," Gebrselassie told the crowd that packed a substantial portion of Geneva's Place des Nations, a large square opposite the United Nations Headquarters, before the run.

"Why do you need to do exercise? Why now? Why didn't we begin this before, years ago? The way we live now is completely different than the way we used to live,” Gebrselassie said.

“Years ago, our life was a kind of exercise. But now that's all changed. That's why exercise must be part of our daily lifestyle. Otherwise we're going to lose everything. Technology has given us many things but it has also taken our natural lives. We will lose that too if we're not healthy."

Warm-up time in Geneva for the @WHO #WalktheTalk #HealthForAll challenge. pic.twitter.com/r3ESOULEsX

“This shows the importance of the work that is done at the WHO and it also reminds the WHO for whom we work,” said Valentin Zellweger, Ambassador of the Permanent Mission of Switzerland to the United Nations in Geneva, impressed by the large international gathering. “We hope this is the first of many.”

Graca Machel, a long-time campaigner for global universal health coverage and co-founder of The Elders, an international non-governmental organisation of public figures noted as elder statesmen, peace activists, and human rights advocates, who were brought together by her late husband Nelson Mandela in 2007, also spoke at the event.

"I hope this can become a simple example of what ordinary people can do. It’s not only up to governments to make a commitment to improving health," said Machel, who was also the First Lady of Mozambique and South Africa.

Machal also applauded Ghebreyesus’s efforts to make universal health coverage one of the pillars of his term as head of the WHO. “He really is walking the talk,” she said, in his pledge to make health a right for all.

Several local, national and international NGOs and UN-affiliated agencies also took part, sharing how they are walking the talk in their work, including organisers of UN Environment (UNEP)'s BreatheLife Challenge, a campaign supported by the IAAF. Coinciding with the Geneva launch, similar "Walk the Talk" events were also held in dozens of cities around the world.

Poster for the BreatheLife campaign in Geneva (Bob Ramsak) © Copyright

Ghebreyesus will open the World Health Assembly, the decision-making body of the WHO, on Monday with an ambitious agenda that aims to save 29 million lives by 2023.

"This is a pivotal health Assembly," said Ghebreyesus, who is currently serving the second year of a five-year term. “On the occasion of WHO’s 70th anniversary, we are celebrating seven decades of public health progress that have added 25 years to global life expectancy, saved millions of children’s lives, and made huge inroads into eradicating deadly diseases such as smallpox and, soon, polio."

"But the latest edition of the World Health Statistics, published recently, shows just how far we still have to go. Too many people are still dying of preventable diseases, too many people are being pushed into poverty to pay for health care out of their own pockets and too many people are unable to get the health services they need. This is unacceptable," he added.

A participant in the 'Walk the Talk: Health for All Challenge' in Geneva (Bob Ramsak) © Copyright

“I support WHO’s mission to promote healthy lives for all people, and I believe countries can do much to make it easy for their citizens to be more physically active to improve their health,” Gebrselassie said. “This can result in so many gains for a person’s own health, as well as the growth and well-being of their communities.”