The world-class field representing 27 countries will include 22 Olympians and 10 who have previously finished on the New York City Marathon podium.

Ghebreslassie, 21, became the youngest men’s winner in the history of the New York City Marathon last year, breaking the tape in 2:07:51. He posted the third-fastest winning time and was the first Eritrean to win the race. In 2015, he became the youngest IAAF World Championships winner and his gold medal was Eritrea’s first ever at the event. He was fourth at the Rio 2016 Olympic Marathon and owns a personal best of 2:07:46 from the 2016 Virgin Money London Marathon, where he also finished fourth.

“I’m proud to return to New York to defend my title,” Ghebreslassie said. “The crowds along the course are fresh in my memory, and I will work hard to do well again this year.”

Keitany, 35, has won the race each of the last three years, including a dominating performance last year in which she surged ahead at Mile 14 to finish the course on a solo run in 2:24:26. Her 3:34 margin of victory was the greatest in the women’s race since 1980, and she became the first able-bodied runner since Grete Waitz to win the event three years in a row. Keitany is a two-time winner of the Abbott World Marathon Majors, taking the series titles in 2012 and 2016. This year, she won her third career London Marathon in April, breaking the women’s only marathon record in a blistering time of 2:17:01.

“Having Ghirmay and Mary return to the streets of New York to defend their titles among a group of athletes from 27 countries around the world is a true testament to the TCS New York City Marathon being one of the most world-class and universally diverse sporting events,” said Peter Ciaccia, president of events for New York Road Runners and race director of the TCS New York City Marathon.

The men's field also includes Lemi Berhanu, the 22-year-old from Ethiopia who won the Boston Marathon in 2016, and has a personal best of 2:04:33 from the 2016 Dubai Marathon, the fastest personal best in the field.

Lelisa Desisa, also from Ethiopia, finished second in New York in 2014 and third in 2015 before failing to finish last year. The two-time Boston Marathon champion owns a personal best of 2:04:45 from the 2013 Dubai Marathon.

Kenyan Geoffrey Kamworor also returns. The 24-year-old was the runner-up in 2015 and is a four-time world champion, twice in cross-country and twice in the half-marathon. His personal-best time of 2:06:12 came from his marathon debut in 2012, when he finished third at the Berlin Marathon.

The women's field will include Kenyans Edna Kiplagat and Betsy Saina. The 37-year old Kiplagat owns titles from the 2010 New York City Marathon, 2014 London Marathon and 2017 Boston Marathon. She is a three-time World Championship medallist, most recently taking silver at the IAAF World Championships London 2017.

They'll be joined by Ethiopian Tigist Tufa, 30, who has lived in the Bronx, who finished third and eighth in her two previous New York City Marathon appearances in 2015 and 2013, respectively. She won the London Marathon in 2015 and was the runner-up in 2016. 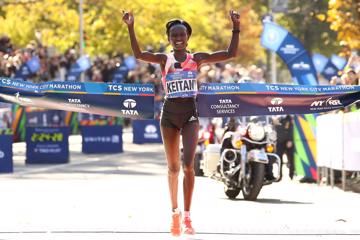