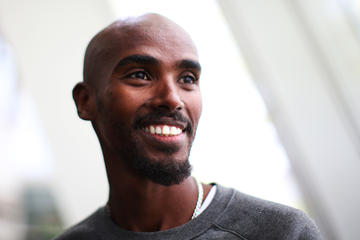 There were whispers in the off-season that Mo Farah was planning an assault on the world indoor 3000m record at the Glasgow Indoor Grand Prix, but the Briton has said his foremost aim is victory at the IAAF World Indoor Tour meeting on Saturday (20).

“To be honest, it would have been nice to have had a few races and then try and see what I can do but I want to think about how I’m going to win this race and secondly, see if I can run a decent time. I don’t think I’m ready for the world record,” admitted Farah, who paid tribute to a world record which has stood since 1998.

“It’s stood for many years – 7:24 by Daniel Komen. Nobody has gone close to that, not even Kenenisa Bekele or Haile Gebrselassie,” added Farah ahead of what will be his first track race since winning the 5000m at the IAAF World Championships Beijing 2015. “I want to try to win the race, run a decent time and end on a high, chill out and come back for the World Half Marathon Championships.”

The championships will unsurprisingly remain the foremost focus for Farah, who often eschews the opportunity to run fast times on the circuit in favour of getting prepared for the major events.

Farah said he “can’t quite do back-to-back sessions and back-to-back hard runs” which were possible when he had fewer miles on the clock but he said his training times are still comparable to the sessions he was putting in this time last year.

“I’m in similar shape to last year,” said Farah, who opened his 2015 account with a world indoor best of 8:03.40 for two miles. “If I compare my times I was running last year in the training camp, it’s similar. I think I’m in decent shape.”

Farah has trained in various locations around the globe over the past decade but the 32-year-old is especially fond of his visits to Ethiopia in spite of some gentle ribbing from the locals.

“The people out there are so nice, even though I’m running for Great Britain and they probably think ‘oh, he’s the guy who beats our guys’,” said Farah. “They say ‘Mo’ or sometimes ‘baldy!’ But they are quite supportive.”

Dafne Schippers has started her season in scintillating shape with a world-leading mark of 7.00 in Berlin, the fastest time by a European sprinter over 60m since the turn of the millennium. But the mantle of medal favourite in Rio doesn’t sit entirely well with the unassuming former heptathlete.

“I can’t say no [on being one of the favourites] as I’m the world champion but I’m going for the medals over there. I’ve made some steps so we’ll see what happens,” said Schippers, who doesn’t miss the balancing act of training for seven events.

“It’s my first winter training as a sprinter which is new and I like it,” added Schippers, who is targeting the IAAF World Indoor Championships in Portland next month. “When you do the heptathlon, there’s always a feeling that you’ve forgotten to do something. Sprinting is easier for the mind.”

But Schippers’ 2016 schedule is still far from light. Aside from the 60m, 100m, 200m and the 4x100m relay, she is also planning to compete in one or two long jump competitions this summer as well.

Like Schippers, Adam Gemili enjoyed a brilliant European Championships in 2014 but the Brit – who won gold in the 200m in Zurich in 19.98 into a headwind – was sidelined for the majority of last summer with a hamstring tear.

Gemili’s goal on Saturday is to “get through it in one piece”. A recent lifetime best of 6.59 suggests he could be a factor in the final, although he is aware the competition even for domestic bragging rights will be tough.

“It’s come on leaps and bounds,” said Gemili on the standard of British sprinting. “There’s a confidence we can compete with the best in the world – the Jamaicans and Americans.”

Gemili will be drawing his abbreviated indoor season to a close after Glasgow to prepare for the summer where he believes he will need to whittle down his lifetime bests – 9.97 for 100m and 19.98 for 200m – to be a contender in Rio.

“9.9 was this magical barrier which every sprinter dreamed of running, but at the moment I don’t think that’s good enough to be seeking a medal,” he said.

One of his rivals this summer is likely to be Trayvon Bromell, the up-and-coming 20-year-old who turned professional shortly after taking the bronze medal over 100m at the World Championships in Beijing.

Bromell described his season as “up and down” and alluded to the disappointment of not winning the 100m title at the NCAA Championships but he sufficiently atoned for that performance in the Chinese capital.

“I didn’t see myself in third place,” recalled Bromell on the 100m final. ”I saw Gatlin and Bolt pass me and I was like ‘man, I’m in fifth’ and then I passed the line and I was like ‘oh, I got third!’ It was a great year overall and I was happy with it.”

The 60m this winter has been the Kim Collins vs Mike Rodgers show but Bromell was a close second to Rodgers in Boston last Sunday and could be the interloper in that anticipated clash tomorrow afternoon.