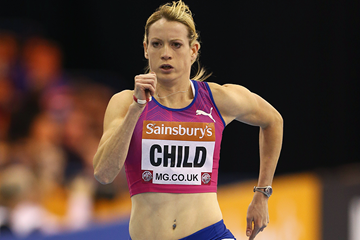 Britain’s 2014 European 400m hurdles champion Eilidh Doyle is the first of a host of global stars to confirm her attendance for the Müller Indoor Grand Prix Glasgow, the sixth and final meeting of the 2018 IAAF World Indoor Tour, on Sunday 25 February.

The Grand Prix returns to Scotland in February having been held in Glasgow for the first time in 2016 as the city alternates hosting with Birmingham up to 2020.

Taking place four days before the IAAF World Indoor Championships Birmingham 2018, the field is certain to include many of the world’s best athletes, with sprint hurdles star Doyle set to sharpen her skills over the flat 400m at the Emirates Arena. Doyle’s last appearance in Scotland saw her win Commonwealth silver in the 400m hurdles at Glasgow’s Hampden Park back in 2014.

“Competing in Scotland is always incredible,” said the world 4x400m silver medallist. “2014 is undeniably one of the highlights of my career, so it is amazing to have the opportunity to race in front of a packed and roaring home crowd once again.”

Doyle’s race over 400m in February will serve as key preparation ahead of the World Indoor Championships, where she hopes to compete over the same distance.

“Eilidh is held in high esteem across the UK, with her contribution to world and Olympic medals for Great Britain and Northern Ireland in the past two years cementing her status as a world-class athlete,” said British Athletics’ Major Event Director Cherry Alexander, winner of the Women in Athletics Award at last weekend’s IAAF Athletics Awards 2017.

“For Eilidh to compete back in Scotland for the first time since 2014 will make for a special occasion; I imagine the noise that the Scottish fans make for her over the two laps will be hard to match anywhere across the world come February 25.”