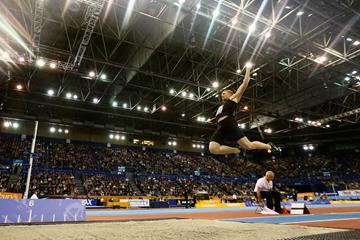 Rutherford another top name for the Glasgow Indoor Grand Prix

After a year in which he won gold at the IAAF World Championships Beijing 2015 and the Diamond Race during the IAAF Diamond League, to complete the ‘grand slam’ of international titles including the Commonwealth Games, Rutherford has targeted the Glasgow meeting as the ideal platform to launch his attempt to win his second Olympic gold medal after his famous triumph at the London 2012 Olympic Games.

“2015 has been a great year for me with winning the World Championships to complete my grand slam and winning the Diamond Race title but next year is another really important year for me to defend my Olympic title," said Rutherford. "The Glasgow Indoor Grand Prix will be my only indoor meeting in Europe and I can’t wait for it.

“It’s going to be special and is the perfect way for me to begin the countdown to the Olympic Games. High-class competition on home soil is a great way to start the Olympic year.”

The British long jump record-holder also is looking forward to returning to the city where he won the 2014 Commonwealth Games gold medal.

“I’ve got really fond memories of Glasgow as it’s where I won the Commonwealth Games in 2014 and I’m looking forward to competing there again. I’ll never forget the amazing support from the Glasgow crowd and I’m sure the fans will be out in force again in February.”

Niels de Vos, Chief Executive of British Athletics said: “Greg has had another superb year and has become one of British athletics’ most consistent and reliable performers. It will be great for the people of Glasgow to get the chance to see him compete there again at what will be the best one-day indoor meeting anywhere in the world.”