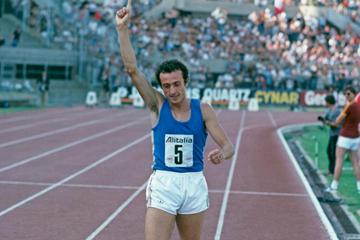 Golden Gala to be dedicated to Mennea

The 2013 edition of the Golden Gala in Rome on 6 June – the fifth leg of the 2013 IAAF Diamond League – will be dedicated to the memory of Italian sprint legend Pietro Mennea, who passed away last week at the age of 60.

The Golden Gala is the third Diamond League meeting dedicated to a late athletics star after the Prefontaine Classic in Eugene and the Memorial Ivo Van Damme in Brussels. During his long career Mennea won at the Zurich Weltklasse in 1976 (20.35 in the 200m) and at the Brussels Memorial Van Damme in 1980 (20.05 in the 200m), two other meetings which are now part of the Diamond League.

Launched in 1980 by late IAAF and FIDAL President Primo Nebiolo, the Golden Gala was an attempt to reunite the sports world which had been split by the Western boycott of the Moscow Olympic Games. Mennea featured in the first edition of the meeting, winning the 200m, and notched up a second victory at the Golden Gala in the same event three years later.

About 60,000 spectators packed the Rome Olympic Stadium for the first edition of the Golden Gala when Mennea beat Jamaica’s Don Quarrie to win the 200m in 20.01 – a time that remained as the meeting record for 16 years until it was broken by Frank Fredericks.

Mennea also won the 1974 European 200m gold and 100m silver behind Valeriy Borzov on the same Rome track. He went on to win two more European gold medals in the 100m and the 200m four years later in Prague 1978. One year later Mennea broke the 200m World record with 19.72 at the World University Games in Mexico City 1979. This record withstood all assaults until 1996 when Michael Johnson clocked 19.66 at the US Trials in Atlanta.

Pictures of Mennea’s famous Moscow win with the emotional commentary of Italian athletics voice Paolo Rosi were shown on 21 March on all TV Italian channels, soon after the death of Mennea.

“It was an immediate decision that came to mind soon after Mennea’s death to dedicate the Golden Gala to a symbol of Italian sport who contributed to the history of the Golden Gala in the first edition,” said Alfio Giomi, the president of the Italian Athletics Federation FIDAL.

On 6 June Usain Bolt will run for the third consecutive year at the Golden Gala and the presence of the Jamaican legend will be the perfect way to remember Mennea.

In 2011 Bolt met Mennea during a kids’ clinic at Villa Borghese in Rome on the eve of the Golden Gala. Bolt and Mennea belong to different athletics eras and are so different characters but both have managed to capture the imagination of millions of sport fans.

Like Bolt at the present time, Mennea inspired a lot of children in the Seventies and the Eighties to start with athletics. “I would like to run as fast as Mennea” became their motto.

Mennea became such a legend, that the Italian television RAI broke the prime-time news bulletin to broadcast his second much-awaited return to competition in 1987.

The Italian athletics family is continuing to launch initiatives to commemorate Mennea. The FIDAL Council unanimously agreed on the proposal of two Italian athletes who now work for the Italian Federation – Alessandro Talotti and Francesco Pignata – to create a commemorative vest with the initials ‘PM’ which will be worn by all Italian athletes during next summer’s IAAF World Championships in Moscow, the city where Mennea won the Olympic 200m gold and 4x400m relay bronze in 1980.

It is not the first time that a sporting legend will be remembered in such a way during a major athletics event. The US team commemorated Jesse Owens wearing the initial letters ‘JO’ on their vests during the IAAF World Championships in Berlin in 2009 at the venue where Owens won four gold medals at the Olympic Games in the 100m, 200m, Long Jump and 4x100m in 1936.

“This initiative comes from the athletes and was presented to FIDAL,” said former Italian indoor High Jump record-holder Alessandro Talotti. “It will be the best way to honour the memory of Pietro Mennea.”

The Italian train company Trenitalia dedicated the new Frecciarossa train to Mennea, who was nicknamed “the Freccia del Sud” (the arrow of the South) from the name of an Italian train. The Frecciarossa Pietro Mennea will have a maximum speed of 400 km/h and will cover the distance between Milan and Rome in just two hours and 15 minutes.