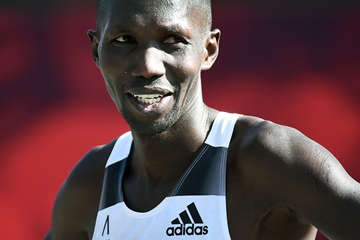 Former marathon world record-holder Wilson Kipsang will return to the Great Manchester Run on 22 May looking for his first victory in what will be his fourth appearance at the IAAF Gold Label Road Race.

With Rio in his sights, and an improvement on the bronze medal he achieved at the 2012 Games, Kipsang is preparing for the London Marathon in April where he hopes to regain the title he won in 2012 and 2014.

“I’m happy to run in Manchester again, as I always like to run there and for sure I hope to run well again with great competition,” said Kipsang. “My first main goal is London, because I want my London title back. When I run well in London I will run well in Manchester, as I have done in the past.

“For now, I will keep my focus on my training for the coming five weeks and will also try to get as much rest I can get.”

Zane Robertson will be aiming for the New Zealand 10km record when he lines up against Kipsang on the streets of Manchester.

Robertson already holds the national records at 15km, 20km and half marathon, so Jonathan Wyatt’s 28:04 is the next logical step. Robertson’s best 10km mark of 28:10 came en route to his 59:47 performance at last year’s Marugame Half Marathon.

Although they have never competed against each other, Robertson and Kipsang know one another well. Robertson moved to Iten with his twin brother Jake when they were 17 in a bid to improve themselves, and the 26-year-old, now living in Ethiopian capital Addis Ababa, regularly trains alongside Kipsang.

“To be invited to the Great Manchester 10K is a great opportunity for me,” said the Commonwealth 5000m bronze medallist. “I’ve been waiting for a while for the chance to run fast and after last year's results this is the place to do it.

“With blessing from the weather, the New Zealand record will not survive,” he added. “10km is not very far on the road and I'm looking forward to pushing the limits of beast mode. The competitors will be tough I’m sure, but in this race my biggest battle will be with myself and the clock.”