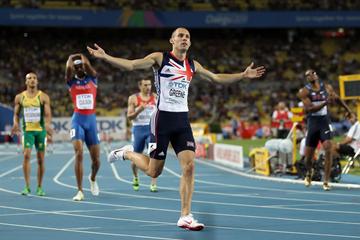 Daegu, KoreaIt wasn’t until he came off the final hurdle that Britain’s David Greene realised he was steps away from winning the World Championship 400m hurdles. The daily grind of training through ugly British winters and taking his lumps on the European circuit fueled him over the final stretch and he crossed the line in 48.26.

On his mantelpiece at home are golds from the 2010 Commonwealth Games and the 2010 European Championships. Now the 25-year-old has World Championship gold. As he met members of the British press, who were still coming to terms with Hannah England’s surprise 1500m silver medal earlier the same evening, he seemed to enjoy himself.

With the possibility of a spot on Great Britain’s 4 x 400m relay team looming he could ill afford a celebration. Meeting the press was as close as he could come to sharing his excitement with others tonight.

“I wont be able to get much sleep I don’t think,” he declares, “ and obviously I do have the relay tomorrow. I don’t know if I am running yet, we will discuss that tomorrow. I can’t wait to get back home to see my family and friends really and do what we do best in Britain and get pissed, I guess.”

He laughs along with the gathered media at his comment though he is not one to drink heavily. Not since he was diagnosed with epilepsy several years ago. Late nights, poor eating habits and alcohol can trigger seizures and he hasn’t had one in almost four years. He has learned to control it. It runs in the family. One of his brothers also has the condition. Should he follow through with the celebration back home in all likelihood he will rest all the next day.

Winning his country’s first gold medal of these World Championships was an achievement of which he is particularly proud. Clearly he loves to wear the British vest.

“The Americans haven’t really been dominant on the circuit this year,” he explains. “ L.J. (Van Zyl of South Africa) has been dominating. It’s nice to see people not just Americans winning for a change which shows that the rest of the world is catching up.

“I know we haven’t won a gold so far but that’s not to say that Mo (Farah) and Jess (Ennis) and the other athletes haven’t performed to the best of their ability. They have worn the British vest with so much pride and determination and when I see the athletes perform like that, even though they haven’t come away with the result they wanted, you can’t ask for any more from them.  I am fortunate tonight that my performance was rewarded with a gold.”

Greene acknowledges the contribution his current coach Malcolm Arnold has made to his career. Arnold, of course, guided former World champion Colin Jackson and Olympic champions John Akii-Bua of Uganda and the Canadian Mark McKoy. And, he points out that he was already a pretty good athlete when he turned up at Arnold’s training grounds in Bath. His journey was tumultuous.

From the age of 11 until he was around 18 Greene was on the books of Swansea City Football Club. He played left wing and dreamed of becoming a professional footballer. Fellow Welshman and Manchester United winger Ryan Giggs was his hero.

“I was 17 or 18 and I had a lot of injuries so I didn’t enjoy playing football and I didn’t have pushy parents,” he remembers. “And so I just decided to walk away from the sport. When I went to university I found people who enjoyed training for track and field as much as I did.  I fell in with the right crowd really. My first coach was Darren Maynard.  He is ex-army. He instilled a hard work ethic in me which I still have to this day. So it’s all down to him really.”

Three years ago he linked up with Arnold.

“I was quite a good athlete when I went to him so he wasn’t inheriting an athlete who was quite low down. He knows what it takes to become a champion,” Greene continues.   “He has a very good work ethic. There’s no short cuts in his training programs and we work very much in partnership.

“I have a lot of respect for him and he has a lot of respect for me. Considering he is 71 years old he is very much a father figure where I live in Bath away from my family. I enjoy working with him every day, and yeah his training program is very hard. He doesn’t say too much but I don’t like being smothered with compliments so it’s a very good partnership in that respect.”

Greene believes his World title will give him the psychological lift he needs to get through another winter of training. Having the medal as a reminder that he’s number one in the world must surely serve as a motivator, a bit like the belt worn by boxing champions.

“I do believe I am capable of running in the mid 47's on a fresh day but I don’t really care about times,” he declares. “I care about medals and as long as I keep collecting medals them I won’t argue.”