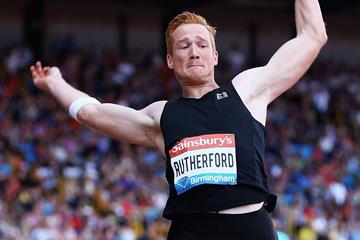 He is excited to be returning to compete in front of a home crowd after injury ruled him out from competing at the Sainsbury’s Anniversary Games in London last August.

"What a treat it’ll be to step out into Hampden Park, and again compete in front of a home crowd," said Rutherford. "We know from London what I can do with the crowd behind me and I can't wait to get that opportunity at the Sainsbury’s Glasgow Grand Prix.”

Rutherford is currently training in the USA, at the Olympic Training Centre in San Diego, and has announced that he plans to make his 2014 outdoor debut at the Mt SAC Relays in Walnut, California, in two weeks’ time.

The 27-year-old is out to rediscover his form of 2012 after injury ruined his 2013 season and will also go for gold at the European Championships in August.

"I am super excited to start competing and hopefully have a season a bit like 2012 and put to rest the demons of 2013,'' he added.

"I am looking to jump further than I have ever jumped, that's always my aim every year,'' said Rutherford, who is the joint British record-holder at 8.35m with Chris Tomlinson.

"But I'm going to be smart with how I compete, I'm not going to compete too much. Last year, when I ended up rupturing my hamstring, I started competing a bit tired."

He had one indoor competition this winter, jumping 8.00m for second place at the IAAF Indoor Permit meeting in Birmingham in February.