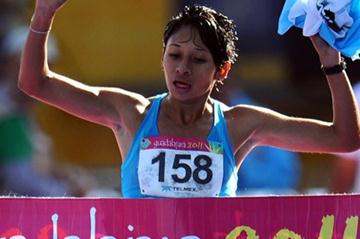 For Franco, it was a family redemption as she made up for her mother Evelyn Nunez’s disqualification at the previous edition in Rio de Janeiro 2007.

The continent’s best ranked woman at the World Championships, Franco led from start to finish and was rewarded with a personal best by 10 seconds and Games record of 1:32:38, over a minute-and-a-half faster than Mexican Graciela Mendoza’s 1:34:19, set in Winnipeg 1999.

Mirna Sucely Ortiz also walked a personal best of 1:33:37 to secure an unprecedented 1-2 for the Central American nation at this level, while Colombian Ingrid Johana Hernandez secured the bronze in 1:34:06, also inside the previous Games standard.

“I was very confident and conditions were excellent today. All the sacrifice has been worthwhile. We want to take Guatemala forward. One of my dreams has come true and I also broke the record. I now look forward to the London Olympics,” said an elated Franco.

“I would like to especially thank my mom for today’s win. She initiated me in the sport. She is my guide and everything else," the 20-year old added.

Her mother Evelyn Rosmari Nuñez was fighting for a medal at the 2007 Games but was disqualified and retired after the 2008 Olympics.

In her first season after leaving the junior category, Franco -whose first international victory came at 2005 Pan Am Junior Championships when she was 14- has improved her mother’s national record by nearly three minutes.

Her compatriot Erick Barrondo repeated her feat a few hours later, leading a group of seven men until the 12th kilometre, which shrunk to three -Colombians James Aurelio Rendon and 2011 World Championships bronze medallist Luis Fernando Lopez were with him- at the 14km mark.

Shortly after, the 20-year old broke away and increased his lead from 13 seconds two kilometres later to almost a minute at the finish line (1:21:51), an advantage that allowed him to take a Guatemalan flag and raised it in celebration of the most important title in his short but promising career.

Barrondo – who finished 10th at his World Championships debut in Daegu - has a family story similar to Franco's. His parents Leticia and Bernardo were long distance runners and introduced him to the sport.

“I started running with them and initially took up the middle distances. I got injured once and my first coach Jorge Coy introduced me to race walking to recover," he recalled.

“At the beginning, it was very tough, but I began to make progress and got to like it. I realised it was my event," he added. “I am wearing the blue and white colors (of the Guatemalan flag). I showed today that anyone from my country can compete on par with the world’s best.”

Both Franco and Barroso are trained by Cuban Rigoberto Medina, who took El Salvador’s Cristina Lopez to the 2003 Pan Am gold in Santo Domingo.

In the women’s Marathon, Adriana da Silva spoiled a home victory and took the title back to Brazil in a new Games record of 2:36:37.

Running a smart race, the 30-year old overcame an a deficit of more than two minutes after 20km and ran past local favourite Madai Perez with four kilometres remaining to clinch the most important victory in her career, equalling her compatriot Marcia Narloch’s feat in 2003.

Perez, the only woman in the field to have run the distance in under 2:30, skipped the World Championships to focus on becoming the first Mexican woman to take the continental gold in 20 years.

And she was serious about it, running a solo lead at passing the first 20km in 1:12:01, over a minute-and-a-half over her closest chaser, Peru’s Lucy Tejeda, and 2:06 ahead of da Silva.

However, her fast pace in the first half began to take its toll, but she still enjoyed a comfortable 1:30 cushion at the 30km mark.

The Brazilian kept her pace at around 37:20 per 10km and progressively cut the Mexican's lead to eventually overtake her with four kilometres to go. Da Silva’s 37:24 split from the 30th to the 40th kilometre found no answer in Perez’s 39:29.

From then on, the Brazilian forged on and finished with the Brazilian flag in her hands in a new Games record, over a minute over Chile’s Erika Olivera’s time of 2:37:41, set at the 1999 edition in Winnipeg.

Perez held on for silver in 2:38:03, ahead of Lucy Tejeda of Peru, who fought a fever contracted four days earlier and secured the bronze in 2:42:09. 1999 winner and Games record holder Olivera finished fifth in 2:44:06.

“It was a tough race, with the altitude (1556m) and the heat (around 24 degree Celsius), but I was mentally prepared for it," she said. "This was my strategy: to start at the back and move to the front in the second half. Due to the weather, it was not going to be a fast run from the beginning, but rather a strategic one and it worked out.”

“When I crossed the finish line I remembered the hard training I went through and I kissed the ground in appreciation for the sacrifice. My preparation at high altitude showed me I could perform well today. The heat affected everyone and I had to hydrate myself a lot. I had never run a Marathon at 4 pm, but I prepared for it," said Da Silva, a 2:32:30 marathoner, who ran 2:33:48 in Vienna in April.

Her next goal will be to reach the Olympic standard of 2:30:07. She could opt for Rotterdam, Vienna or London.

Action will start on the track at the Telmex Stadium on Monday (24) with five finals, including the women’s Pole Vault with Brazil’s defending champion and World gold medallist Fabiana Murer, and the women’s Hammer Throw, with multiple World and Olympic medallist Yipsi Moreno of Cuba looking for a third consecutive crown.

The other three finals are the men’s 5000m and Discus Throw and the women’s 10,000m. The program also features the first day of the Decathlon with 2008 Olympic and 2011 Daegu bronze medallist Leonel Suarez of Cuba and the preliminary rounds and semifinals of the men's 100m, with 2003 World champion and Daegu bronze medallist Kim Collins of St. Kitts and Nevis running in heat 4.