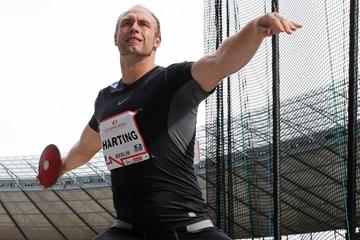 Olympic Discus champion Robert Harting and World Javelin champion Mariya Abakumova are the latest global champions announced for the Prefontaine Classic, the second of two US legs of the IAAF Diamond League, held in Eugene on June 1.

Harting knows how to win. The German star’s last loss dates back all the way to August 2010, and his winning streak has grown to a daunting 33 meetings, including gold medals at the 2011 World Championships and 2012 Olympic Games.

A colourful character who likes to celebrate his big successes by ripping off his vest and throwing it to the crowd, the 28-year-old has compiled one of the event’s best competitive records in history.

One thing Harting has not done, however, is win the overall Diamond League Race, and defending his Pre Classic title from 2011 – the last time the event was staged at the meeting – will be no easy feat.

The field is stunning, comprising the top seven finishers from the London Olympics. The seven-man field is so complete that every medallist from the Olympics and World Championships since 2008 is included, plus every previous Diamond League Race winner.

Harting has not yet won a Diamond League title, but Gerd Kanter of Estonia, Virgilijus Alekna of Lithuania, and Piotr Malachowski of Poland have. They are members of their own club; the only Diamond League winners in the event.

Malachowski has earned silver medals at the Olympics and World Championships but defeated all of his big rivals to win the 2010 European title.

London silver medallist Ehsan Hadadi of Iran is also in the field. The 2011 World bronze medallist, Hadadi will make his first-ever appearance in Eugene. Also confirmed and in the Pre Classic for the first time are Germany’s 25-year-old Martin Wierig, the 2007 European under-23 champion, and Spain’s Frank Casanas, a veteran of four Olympics.

This field is without question the best ever assembled on American soil since the 1996 Olympic Games.

The women’s Javelin is one of a few select events that will be held on May 31 on the eve of the main competition. Russia’s Abakumova, the second-longest thrower in history, will face stiff competition from Germany’s Christina Obergfoll and South Africa’s Sunette Viljoen.

Olympic silver medallist Obergfoll – one of just four women in history to have thrown 70m – is the reigning Pre Classic champion, winning with 65.48m when the event was last staged at the meeting in 2011.

Viljoen was the surprise bronze medallist at the 2011 World Championships, and has fond memories of competing on US soil after breaking her own African record with 69.35m at last year’s Diamond League meeting in New York.

Also throwing will be a pair of World and Olympic finalists and national record-holders in Martina Ratej of Slovenia and Madara Palameika of Latvia. Add to that group European champion Vira Rebryk, Commonwealth silver medallist Kimberley Mickle of Australia, and US champion Brittany Borman.

Conspicuous in her absence will be World record-holder and two-time Olympic champion Barbora Spotakova, who is on maternity leave. The Czech star is due to deliver this summer and plans to return to action in 2014.