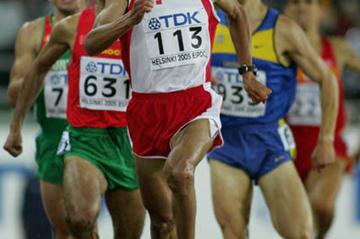 As competition concludes at the 10th IAAF World Championships in Athletics, some of the finest battles - along with a potentially unprecedented double - have been saved for last.

As with Saturday’s competition, the final day’s programme begins with the women’s Marathon. Defending champion Catherine Ndereba of Kenya returns, reportedly extremely eager for a second gold medal. Her chief competition is expected to come from World record holder Paula Radcliffe, who is still seeking her first gold at the World Championships in Athletics. As with most World Championship Marathons, podium spots are anyone’s guess. Mari Ozaki and Ryoko Eda, are the backbone of the traditionally strong Japanese squad, and should be considered a strong threat. In all but the first two editions of the World Championships, Japan has taken home at least one medal.

Ramzi aims for the ‘impossible’

The men’s 800m will be hotly-contested, with Olympic champion Yuriy Borzakovskiy hoping to tread on the turf of defending champion Djabir Said-Guerni. But with “new” names at the distance - Canadian national record holder Gary Reed, World 1500 metres champion Rashid Ramzi and French 1500 specialist Mehdi Baala among them - challenging the ‘old’ guard that includes Kenya’s perpetual world leader Wilfed Bungei, the race is entirely up for grabs. A win by Ramzi would complete the first ever middle distance double at a World Championships.

After a very abbreviated season, Tatyana Tomashova returns to defend the surprise title she captured in Paris two years ago. The odds are against the Russian though; no one has ever won a pair of consecutive titles. A marginal favourite is this year's middle distance discover, Maryan Yusuf Jamal of Bahrain, who lowered her personal best to 3:59.13. Two others, Russians Yuliya Chizhenko and Olga Yegorova have dipped under four minutes this year.

With Jacques Freitag not making it through qualification, a new champion will be crowned in the men’s High Jump, with Olympic champion Stefan Holm hoping to follow compatriot Kajsa Bergqvist for a Swedish sweep of the event. In good conditions, both Russian Yaroslav Rybakov and Andriy Sokolovskyy of Ukraine look to be strong contenders as well; both have scaled personal bests of 2.38 this season.

The stadium to go Javelin crazy once more

In the women’s Javelin throw, the crazy Finnish spear fans who will gather at Olympic Stadium will be treated to a fierce battle between 2001 World champion Osleidys Menéndez and Germany’s Steffi Nerius. The Cuban, also the reigning Olympic champion, is hoping to become just the second two-time winner in the event. The third spot seems to be wide open; on paper, Sonia Bisset, another Cuban, who has reached 67.67 this year, looks to be a contender as well. Regardless of where they ultimately finish, Finns Mikaela Ingberg and Paula Tarvainen will certainly experience the biggest thrills of their athletic careers.

Despite the absence of World record holder and 10,000m champion Kenenisa Bekele, conventional wisdom dictates that the 5000 title will remain in east Africa. At least if defending champion Eliud Kipchoge has his way. Compatriots Isaac Songok and Benjamin Limo could help in the team scheme. Another serious contender is Australian Craig Mottram, whose hunger for a major title continues to grow after a near-PB 12:56.13 last month.

Capping the competition will be the finals in the 4 x 400m relay. The American men, guided by the 400 1-2 punch of Jeremy Wariner and Andrew Rock, and the Russian women, seem virtually unstoppable.

Written coverage of the

As in Paris 2003, the IAAF's own team of writers will be producing a feature story/interview with every individual gold medallist crowned in Helsinki 2005. These stories will be published as soon as possible after each final in the main NEWS section

A concise preview at the start and a wrap of the main highlights of the competition will also be a daily aspect of the IAAF website's coverage of the World Championships.

And our regular major championship columnist Jim Dunaway will again give his own unique view of some of the more bizarre or quirky aspects surrounding events at Helsinki 2005.

We hope you will enjoy our coverage.