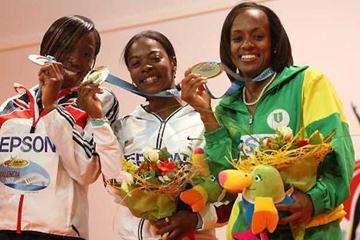 Tahesia Harrigan paid tribute to the role her three-year-old son, Khamauri, has made in igniting her career after she wrote history at the 12th IAAF World Indoor Championships by becoming the first ever World Championship medallist from the tiny Caribbean nation of the British Virgin Islands.

The unheralded Harrigan blitzed to a national record of 7.09 to win the bronze medal in the women’s 60m final, finishing just 0.03 behind gold medallist Angela Williams of the USA.

But the 26-year-old, who led for much of the race in Friday’s final, insisted the birth of her son has helped her become a more rounded individual.

“It helped me grow up a lot in sports,” said Harrigan, 26, who was pregnant with her son and missed the 2004 Athens Olympics. “It made me become a lot more appreciative.”

Just 10 minutes after sealing her bronze medal on Friday she rang her son, who was watching the race on the internet with her coach, Sidney Cartwright, from her home in Miami, Florida.

Although she giggles that Khamauri was a little confused with the outcome of the final.

“He thought I had won because he remembered me winning my semi-final,” she said smiling.

Despite her talent for athletics from a young age she preferred to concentrate on her studies and it was only in her later High School years did she start to realise her potential as a sprinter.

“I didn’t get really serious at 14 or 15, it was just for fun,” said Jones, who holds all the national records from 60m to 400m as well as the long jump and triple jump marks. “The first Olympic Games I ever watched was the last one.”

In 2006 she ran a national record of 11.13 in El Paso and opted to take up athletics professionally but a broken toe in December 2006 proved deeply frustrating.

“The entire 2007 season was very hit and miss because of the toe,” she said. “I was away from my son for three or four months (based in Europe) and I went to the World Championships (where she reached the 100m quarter-finals) and said I’m going to have to go home because I’m self-defeating myself. I really think I was capable of going faster.”

With a fresh and invigorated approach to training this winter she decided to work harder on the technical aspects of her event and the results have been spectacular.
“I’m starting to understand track and field,” she explained. “I started my season running 7.16 in Stuttgart, so I said to myself ‘Okay, you can do it.’”

Going into the competition here in Valencia she was ranked joint-fifth in the world and many experts would have dismissed her medal chances. Yet they did not reckon on Harrigan’s new-found confidence.

The British Virgin Islander stepped up a notch, clocking a new national record of 7.12 to win her semi-final and was drawn in lane three in the final.

Ignoring Nigerian Franca Idoko’s stumble out of the blocks, Harrigan kept a cool head a made a bullet-like start out of the blocks. She appeared to lead up until the 50m mark, however, in the final strides she was overtaken by eventual silver medallist Jeanette Kwakye and Williams the champion.

“They are only three people on the podium so I’m pleased, although you strive for gold,” she explained. “It really boosts your confidence to know your country is really proud.”

The British Virgin Islands with a population of just 22,000 and only 59 sq miles in size has never before spurned a world finalist, let alone a world medallist and her success is huge news on the Caribbean island.

She knows the premier Ralph T O’Neal personally and although she is based in Miami she makes regularly visits back to her homeland which built its first ever synthetic track in December.

“I used to train on the grass track but I had to watch out for the pot holes and hope I didn’t twist my ankle,” she explained. “We also have a 200m track on gravel and the turns were so tight I’d run in lane one and I’d be in lane four around the bends.”

But, for the future, Harrigan has big ambitions. She is confident she can translate her outstanding indoor form to the 100m and is optimistic for the season ahead.

“I have had difficulty at the end of my race in the past, but I’m improving and I know I can go under 11 seconds,” she said.

And for the Olympic Games later this summer?

“I want to be a finalist or a medallist,” she added. “I have big hopes.”