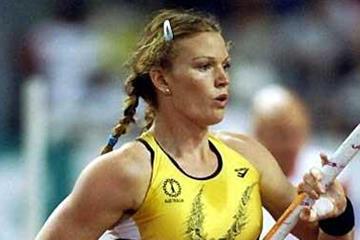 The Optus Grand Prix Series moves to the State Athletics Centre, Brisbane on Friday 11 February from 7pm and continues on to the Sydney International Athletic Centre on Sunday 13 February from 4pm.

One of the highlights of both meets will be the clash between pole vault world record holders Emma George and Stacy Dragila from the United States, and World Championships bronze medallist Tatiana Grigorieva.

George won at the BankWest Grand Prix with 4.50m but missed at three attempts at a new World Record of 4.62m.

Dragila also competed at the Millrose Games (indoors) in New York winning with a best vault of 4.42m. This was a week after she won another indoor meet in the US with 4.51m.

Grigorieva returned to competition after a minor injury and finished seventh in an indoor meet in Stuttgart with 4.20m. She will return to Australia for the rest of the Optus Grand Prix Series and starts her campaign against George and Dragila in Brisbane and Sydney.

Farmer-Patrick’s most noted international achievement was her silver medal at the 1993 World Championships when she and winner Sally Gunnell both went under the world record.

Her time of 52.79 seconds in that race places her at number four all-time in the 400m hurdles.

Born in Jamaica, she first represented her native country in the 1982 Commonwealth Games in Brisbane and then the Los Angeles Olympics in 1984. She changed her nationality to the US in 1988 and went on to represent the US and two Olympics in 1992 and 1996.

Poetschka set her first Olympic A qualifier at the Optus Grand Prix in Canberra in January when she clocked 56.04 seconds. Pittman’s personal best of 56.23 seconds was recorded in December in Sydney and was only 0.09 seconds outside the Olympic A standard.

Adkins who arrived in Brisbane yesterday has a personal best of 47.54 seconds, was the 1996 Olympic gold medallist, 1995 World champion and World University Games champion in 1991 and 1993.

Robinson will be fired up for some big performances against his international and domestic rivals after missing the BankWest Grand Prix in Perth on Saturday after a surf mishap.

A strong Kenyan contingent of distance runners will compete against Australia’s best  in Brisbane.

In a three-pronged attack over 5000 metres, Joseph Kimani, Luke Kipkosgei and Martin Keino will ensure a lightning pace in a 26-person international field.

Kimani was a previous winner of the Zatopek 10,000m in Melbourne and went on to finish sixth over that distance at the Atlanta Olympics.

In his Australian debut, the exciting Sammy Mutai (KEN) will aim at a time in the 1500m faster than the Olympic A standard of 3:36.80. He will have every chance with a very strong field including fellow Kenyan John Kosgei, Australians Nick Howarth (SASI) who has already run under 3 minutes 40 seconds this year, Scott Petersen (VIS) and Holt Hardy (NSWI).