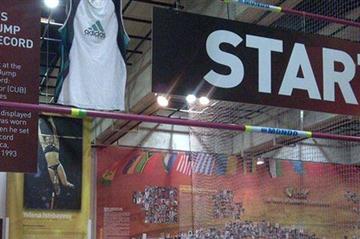 Ahead of the Official Opening Ceremony on Monday evening (15 October) the IAAF Centenary Historic Exhibition in the Museu Olímpic i de l’Esport Joan Antoni Samaranch, Barcelona, opened its doors today for the first time to the general public.

From an empty space, the temporary exhibition room of the Museum has been transformed in 5 days into an exhibition containing a collection unique in our sport's history. An 8 lane sprint straight has been laid and marked out, 8 main displays (lanes) some up to 4 metres in height and 12 metres in length have been constructed on it and around the room, and 15 glass display cabinets have been filled with historic artefacts.

On Monday evening (15) the Exhibition will be officially opened by IAAF President Lamine Diack and the Deputy Mayor of the City of Barcelona Maite Fandos i Payà, who will be joined among others by 1976 and 1977 IAAF World Cross Country champion Carmen Valero, 1992 Olympic 1500m champion Fermin Cacho, and 3-times IAAF World 800m champion Wilson Kipketer.

The Official Inventory of the items on display has now been published (see panel right) and while the official photographing and filming of the exhibition doesn’t take place until Monday, we are delighted to bring you a few pictures of the build-up process from day one to the completed exhibition today.

We greatly thank our supporters, VTB, the main partner of the IAAF Centenary and supporting partners, adidas and MONDO. Without them this exhibition could not have taken place.

The first 400 people to enter the exhibition were given an adidas bag as a gift, along with the souvenir leaflet in four languages (English, French, Spanish and Catalan) which is available to all visitors.

The IAAF Centenary Historic Exhibition, one of the core celebrations of 100 years of Athletics Excellence, puts the IAAF and the sport of Athletics into a historical context, illustrating their remarkable legacy with the greatest ever assembled collection of artefacts from our sport’s history.

The IAAF Centenary Historic Exhibition is open to the public for six weeks from Saturday 13 October, with an official opening ceremony (by invitation only) on the evening of Monday 15 October.