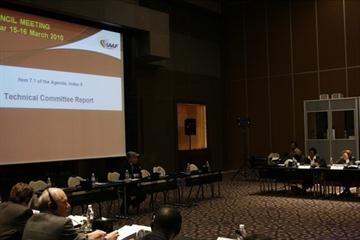 Meeting after the conclusion of a hugely successful edition of the World Indoor Championships, bids for upcoming IAAF events were announced as the IAAF Council began a two-day meeting at the Grand Hyatt Hotel in Doha, Qatar.

The meeting opened with a review of the weekend’s competition, which was brilliantly capped with a pending World record of 17.90m in the Triple Jump by Teddy Tamgho of France. IAAF President Lamine Diack characterised the 13th edition as one of the finest ever, while H.E. Sheikh Saoud Abdulrahman Al Thani, the President of the Local Organising Committee, said the event hugely exceeded his, and the organisers’ expectations.

Among the matters discussed and decisions made during the meeting’s first day:

By the deadline of 10 March, letters of Intent have been received from Beijing and London, as well as from the Polish city of Chorzow, a city of 2 million people in the Silesian region. The decision on the 2015 host will be taken at the November 2010 Council meeting.

Letters of intent have been received from New York City and Karnava Bulgaria, and a decision is expected in November 2010.

Letters of intent have been received from Nassau, Bahamas and Greensboro, USA, and Slovenia (city tbc) and a decision is expected in November 2010.

A letter of intent has been received from Bahrain (city tbc) and a decision will be expected in November 2010.

Crystal Cox (USA)
This athlete recently accepted a 4 year period of ineligibility and disqualification of her results from 2001 after having admitted her involvement in the BALCO conspiracy.  She took part in the 4x400m US Relay team who won the Gold medal at the 2004 Athens Olympic Games.  According to the IAAF Competition Rules in effect in 2004, the US Relay team results will be disqualified accordingly (Rule 39.2).

Justin Gatlin (USA)
In September 2008, Justin Gatlin received a 4 year sanction from CAS as a result of a second anti-doping rule violation under IAAF Rules ending on 24 July 2010.  Earlier this year, Mr Gatlin wrote to the IAAF to request an early reinstatement on the grounds of substantial assistance.   The request was rejected by the Doping Review Board.

Yesenia Centeno (ESP)
Mrs Centeno, a Spanish athlete, received a 2-year sanction from the Spanish Federation for an anti-doping rule violation committed in 2009.  Her sanction is normally due to end on 9 June 2011.  The IAAF recently received a request from the athlete via RFEA for a reduction of the 2 year sanction on the grounds of substantial assistance.  This application is still being considered by the IAAF Doping Review Board.

IAAF v JAAA and Ms Sheri-Ann Brooks
The IAAF has withdrawn its appeal to CAS in this case following the athlete’s acceptance of an anti-doping rule violation under IAAF Rules and a period of 3 months’ ineligibility ending on 12 February 2010.  In addition, all of Ms Brooks’ results at and following the Jamaican National Championships held on 27 June 2009 have been disqualified with all resulting consequences under IAAF Rules.

Ms Brooks tested positive at the Jamaican Nationals for a related Specified Substance but was exonerated of an anti-doping rule violation by the Jamaica Anti-Doping Appeals Tribunal in September 2009.   Pending the resolution of her case, Ms Brooks withdrew from competition and she therefore missed both the 2009 World Championships and the 2009 World Athletics Final for which she had qualified.

New regulations related to IAAF Athlete Representatives (AR) have been finalised by the IAAF Juridical Commission after consultation with representatives of IAAF Member Federations, Athletes and Athlete Representatives. These regulations relate to those representing athletes in the World Top 30. Applicants need to have proper experience in athletics, have shown professional integrity and not to have been convicted of a criminal offence or anti-doping rule violation. The regulations include a preliminary examination (organised at Area level). Athlete reps will need to fulfil certain financial responsibilities, such as the provision of professional liability insurance or a bank guarantee for the minimum amount of $30,000. Failure to meet obligations will result in sanctions including but not limited to reprimands, fines and rights of representation. Authorisations will be valid for a period of 4 years.

A PDF of the full regulations will be posted on the IAAF website at a later date.

The Council approved the following Timetable:

The Council approved the Entry Standards.

26th IAAF World Race Walking Cup
The Chinese Athletics Association and City of Taicang, that originally submitted a bid to host the 2012 edition, accepted the Council’s proposal to host the Cup in 2014.

The Council is requested to take note of the following Transfers of Allegiance which have been processed by the Office since the November 2009 meeting.

Athlete - From/To - Eligible for Performance - Eligible to compete Competitions organized under Rules  1.1 (a), (b) & (f)

- Other News -
World Athletics Day 2010
153 Member Federations have announced their participation in the WAD 2010.