Savouring the best, promoting the present, and engaging with the future - Heritage Collection launched in Birmingham

The ornate Banqueting Suite on the first floor of the historic Council House in Birmingham’s Victoria Square seemed a suitable venue in which to launch the IAAF Heritage Collection on the closing day of a thoroughly gripping 17th edition of the IAAF World Indoor Championships.

The IAAF Heritage Memorabilia Donation Ceremony - conducted by Chris Turner, who was appointed as Director of the IAAF’s newly-created Heritage Department at the turn of the year - drew a strong thread from the rich past of track and field to the thriving present, with an aim of projecting that link towards the continuation of a trailblazing future for the sport.

At the head of the vast room, and along the sides, were displays depicting the giants who have graced athletics down the years: Dorando Pietri, Fanny Blankers Koen, Bob Beamon, Jim Thorpe and Paavo Nurmi.

Poignantly, as IAAF President Sebastian Coe pointed out to the assembled throng, there was also a black and white photograph of Sir Roger Bannister running outside Number Ten Downing Street, the traditional home of Britain’s Prime Minister, watched by the great British leader Sir Winston Churchill and accompanied by the two men who helped to tow him through the four minute mile barrier down the road from Birmingham at Iffley Road in Oxford 64 years ago. 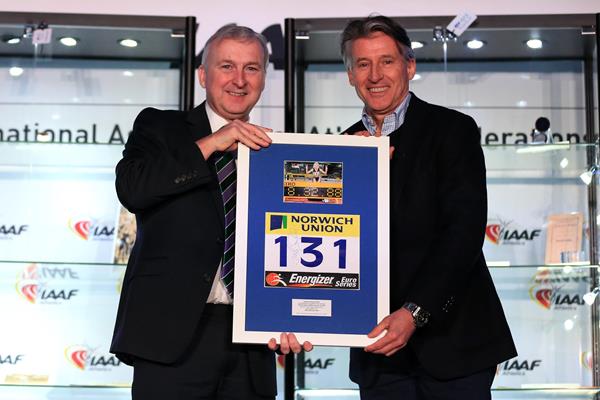 It had been announced only an hour earlier that Sir Roger had died at the age of 88. The IAAF President, one of those who took on the great British pioneer’s baton as a world record breaker over the classic one mile distance, paid a fulsome tribute to his celebrated fellow-countryman.

“On 6 May 1954 Roger made the impossible possible,” said Lord Coe. "The world’s best runners, such as Paavo Nurmi, Jack Lovelock, Arne Andersson, Gunder Haag and Bannister’s personal hero Sydney Wooderson, had been seriously attempting the four minute mile for a quarter of a century.

“It was as much a psychological as it was a physical barrier and Bannister’s success allowed mankind to enter a new world filled with possibilities. Bannister’s achievement transcended sport beyond athletics. We have all lost a giant and, for many of us, a deep close friendship.”

Connecting the present to the past

In addition to the black and white shots of the barrier-breaking Bannister, Beamon and Co, there were global champions of the more recent past and of the present in attendance to help Coe, Turner and the IAAF publicly unveil this bold venture.

Coe, a double Olympic champion at 1500m, outlined the vision behind the project in his key-note address.

“The nature and provenance of this building and the City of Birmingham’s historic association with world class athletics is, I guess, the very essence of the journey we’re embarking upon today,” he said.

“IAAF Heritage will celebrate and forge connection across 3000 years of our sport, telling athletics’ rich story, based upon a myriad of marvellous memories and moments which few other sports can match.

“In an era with so many entertainment attractions on offer to young people - some would say distractions - IAAF Heritage’s goal is to put the seeds of such heroes as we have here today, their records and their performances, into context, chronicling their very personal odysseys which were the very foundation and motivation of their careers: simply put, savouring the best, promoting the present, and engaging with the future.”

With that future in mind, the IAAF President alluded to the classic sprint duel that had been fought between Christian Coleman and Bingtian Su in Birmingham Arena the previous evening.

“How would we go about capturing the long-term loyalty of the first-time athletics fans here with us in Birmingham whose interest may have been sparked the USA versus China head-to-head that we witnessed last night in the men’s 60m final?” Coe pondered.

“Well, we’ll start by taking them on an historic journey of speed. We’ll put the performances of Christian Coleman and Bingtian Su into context with historic deities of the dash, such as Charley Paddock, Jesse Owens, Armin Hary, Carl Lewis, Usain Bolt.

“We’ll employ the IAAF’s archive of competition footage, documents and photographs to explain the drama and the surrounding back-story of the great moments of our history.

“IAAF Heritage has begun for the first time assembling by donation, by loan and purchase, the world’s greatest historic collection of athletics artefacts and memorabilia.

“It’s a collection that will provide a physical, tangible link with the great names and deeds of our sport"

“It will help connect the legends who are the athletic ambassadors to new generations of athletics stars. While the establishment of a museum to the sport in Monaco is the goal, the most important mission of IAAF Heritage will be to take athletics’ indelible moments to the fans in our six continental areas.”

The IAAF Heritage Collection - directed by Turner, a passionate, lifelong aficionado of the historical annals of the sport - is to be entitled ‘Athletics, 3,000 Years and Counting.’ It will be taken on tour to IAAF world championships and World Series events around the globe.

“We want to inspire interest on the ground and generate connection with local stars, their stories and of course their neighbourhoods,” Coe continued. “The banners, the backdrop and videos you’ll see today take us along an evolving timeline from 776BC to 2017AD, illustrating athletics’ unique story.

“We’re delighted by the historic importance of the objects which are being donated. Among these are one hundred artefacts from our South American area association Consudatle, which are being given to celebrate their centenary this year.

“Dating from Ancient Olympia to the end of the 19th century, this generous contribution marks the beginning of what will be the world’s foremost athletics collection.”

The IAAF President paid tribute to “the unmatched enthusiasm, knowledge and passion for our sport’s history” of Consudatle President, Roberto Gesta de Melo.

“I started collecting our sport’s memorabilia about 50 years ago,” said President de Melo, who announced that a further items from the collection he established for his area association will be donated to IAAF Heritage later in the year. “I strongly believe it is important to preserve the best of this important human activity to contribute to the knowledge of future generations.”

In a link to the present, the trailblazing Venezuelan triple jumper Yulimar Rojas was on hand to present A History of South American Athletics to Lord Coe - 24 hours after the 2017 world outdoor champion had completed the successful defence of her world indoor crown in Arena Birmingham. 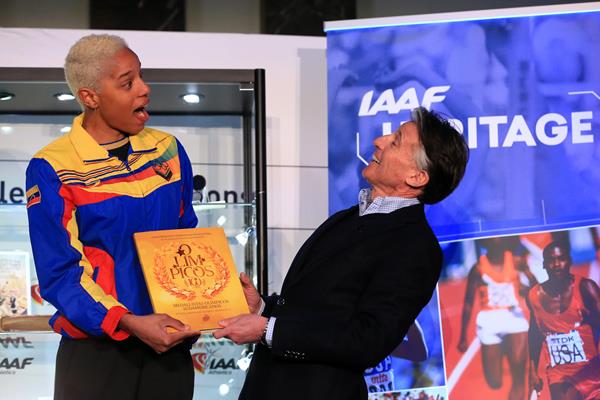 Fittingly, the inaugural donations to the collection also shared links to both the IAAF World Championships and to Arena Birmingham, a veritable cathedral of indoor athletics, which has now witnessed a staggering 18 world indoor records or bests following the thrilling finale that the Polish men’s 4 x 400m relay quartet brought to the championships in the ultimate track event on Sunday.

Councillor Ian Ward, leader of Birmingham City Council, accepted private donations to the collection of the number bibs worn by Ethiopia’s Hailu Mekonnen when he set a world indoor two mile best on the Birmingham track in 2000 and by the Romanian Gabriela Szabo when she broke the 3000m world record in 2001. As Turner underlined: “It seems right to recognise the stadium in which so many great moments and world records have occurred.”

There were also donations of the number bib worn by the peerless Ethiopian king of distance Haile Gebreslassie when he dipped down into middle distance territory and stunningly captured the world indoor 1500m title in Maebashi in 1999 - and of the number worn by the mighty Maria Mutola of Mozambique when she collected the sixth of her record seven world indoor 800m golds in Budapest in 2004. 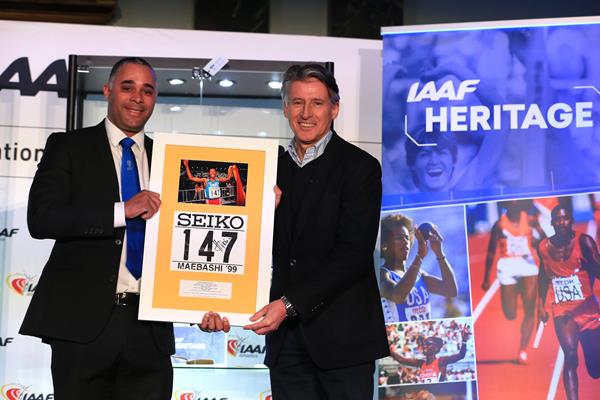 Former British sprinter Jason Gardener – the Bath Bullet, as he was dubbed in his days as a formidable indoor force – appeared in person to loan the IAAF Heritage Collection the pair of the silver spikes he wore en route to 60m gold in Budapest in 2004.

Stacy Dragila also stepped up on stage, looking little different to when she became the first woman to claim a global pole vault title at the 1997 IAAF World Indoor Championships at the Palais Ominsports in Paris-Bercy.

The woman from Auburn, California, was very much the Bannister of the women’s vault, taking her event to new frontiers. The 46-year-old gave a wry smile as she watched footage of her younger self clearing 4.40m to claim that historic gold in the French capital, equalling the world indoor record held by the silver medal winner, Emma George.

Dragila and George were the two great pioneers of women’s pole vaulting, both with colourful backgrounds echoing those of some of the greats of the men’s vault.

The Reverend Bob Richards, a theology professor from Dragila’s home state, became known as “the vaulting vicar.” He was the first man to win an Olympic title with a 4.50m-plus height, in Helsinki in 1952 - and the first to achieve an Olympic gold with his successful defence in Melbourne four years later.

The Reverend Richards was succeeded as Olympic champion by his fellow countryman Don Bragg, who delighted the crowd in the Stadio Olympico by celebrating with a Tarzan yell when he cleared 4.70m to win in Rome in 1960. Four years later Bragg was playing the lead role in the filming of Tarzan and the Jewels of Opar, happily swinging from vine to vine in front of the cameras, when a court order halted production because of copyright.

George, who took the women’s world record from 4.25m to 4.60m, spent her early teenage years performing as a trapeze artist with a circus troupe called The Flying Fruit Flies.

Dragila, who raised the world record bar up to 4.81m, to the era of the Svetlana Feofanova and Yelena Isinbayeva, spent much of her youth in California as a rodeo rider.

“Coming into those world indoor championships in 1997, I was considered a dark horse,” Dragila recalled. “For some time, I had been watching Emma George in awe, wishing I could compete with her at her level.

“To win that meet set me on the road to achieving more. That was the launching point for me.”

Of course, Dragila went on to become the first world outdoor women’s pole vault champion in Athens later in 1997 and then the first Olympic women’s champion in Sydney in 2000.

The USA singlet and number bib that Dragila wore in Paris in 1997 is another historic addition to the IAAF Heritage Collection. 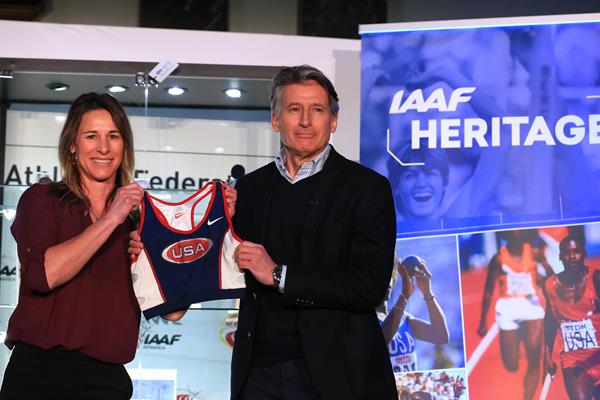 “That vault in Paris was 21 years ago, which really frightens me. I was in the stands last night, thinking Sandi Morris was probably three years old when I was setting the bar at 4.40m - and now the winning standard is 4.95m.

“It shows that women are in contention, and that we can do things just as well as men. It’s pretty humbling to know that I was one of the first.

“I’m very proud of that moment and excited to be part of the heritage now.”