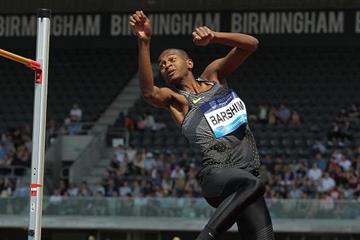 In Rome a few days ago, one of the questions posed to Mutaz Essa Barshim was about his health and the lack of heights coming close to those he produced back in 2014, when he came within two centimetres of Javier Sotomayor’s long-standing world high jump record of 2.45m.

The Qatari, who had been struggling with various niggling injuries for most of last season, confessed that heights weren’t a priority in an Olympic year but, in the end, the crowd at the IAAF Diamond League meeting in Birmingham on Sunday (5) certainly didn’t have to settle for a second-rate contest.

Having only finished a disappointing sixth in the Italian capital with 2.27m, Barshim produced a world-leading 2.37m clearance, his best result for more than a year.

Olympic silver medallist Erik Kynard of the US pushed him all the way after taking the lead at 2.35m with a first-time clearance, having to gamble by going for broke at this height after two failures at 2.33m, while Barshim needed two attempts.

Seeing Barshim attack those heights with the confidence he showed two seasons ago has just made Olympic year that little bit more interesting in this discipline.

As the men’s high jump highlighted, many events were rematches from Thursday’s IAAF Diamond League meeting in Rome and the women’s pole vault field looked very much the same, although there was the addition of 2011 world champion Fabiana Murer.

It was, however, the current world champion Yarisley Silva who stole the show.

The Cuban had finished third in Rome, but a third-attempt clearance at 4.84m in Birmingham catapulted her into the lead as Greece's Ekaterini Stefanidi and Switzerland's Nicole Buchler bowed out at this height after 4.77m clearances, finishing second and third respectively on countback.

Silva had three unsuccessful attempts at 4.92m but her winning mark was an outdoor world lead and an IAAF Diamond League record.

In the women’s shot put, 2014 IAAF World Athlete of the Year Valerie Adams was looking to build on her consistent form that saw her take the win in Rome but, just like in the women’s triple jump, the crowd saw a big favourite being defeated.

Doha winner Tia Brooks produced a personal best of 19.73m in the fourth round to secure another 10 points in the Diamond Race, with Adams finishing 10 centimetres in arrears.

However, the defeat of Adams was far from the biggest shock of the day. That came in the women’s triple jump as Kazakhstan’s Olga Rypakova put an end to Caterine Ibarguen’s 34-strong winning streak.

Ibarguen was leading with 14.56m until the final round, the jumpers having to deal with distracting swirling winds, but a last attempt from Rypakova saw her take the lead with 14.61m.

In the past, Ibarguen has been impressive at responding to situations like this by bouncing back but the Colombian’s last attempt of 14.53m was not enough to avoid her lengthy winning streak coming to an end.

Ironically, it was Rypakova who inflicted the last defeat, almost four years ago, on Ibarguen in the London 2012 Olympic final, when the pair took the gold and silver medals respectively.

Goodwin gets his revenge for Rome

Later in the sandpit, long jump world leader Marquise Goodwin put an end to another impressive winning streak by a horizontal jumper.

Britain’s Olympic champion Greg Rutherford had gone unbeaten for almost a year – his last loss coming at the IAAF Diamond League meeting in London last July – and won nine straight competitions. But after a couple of slightly lacklustre competitions in Rabat and Rome, being beaten by Rutherford in the latter meeting, Goodwin was close to his best.

The American, who is coached by four-time world champion Dwight Phillips, leapt to an impressive 8.42m in his second-round effort, just three centimetres short of his world-leading mark, to not only seal the victory over Britain’s world, European and Olympic champion, but also to steal the stadium record from him.

In a high-quality competition which saw six men exceed eight metres, US international Mike Hartfield was second with 8.29m with Rutherford down in fifth with 8.17m.

In the men’s discus, world champion Piotr Malachowski found his way back to winning ways after a nightmare performance in Rome that saw him finish sixth.

The Pole won with 67.50m, the final throw of the competition when he had already secured the win following his fourth-round 66.91m.

Germany’s Robert Harting, the Olympic champion and three-time world champion prior to Malachowski’s win in Beijing last August, improved his season’s best to 65.97m to remind the world that despite being ruled out through injury all of last year, he is still likely to be a contender come Rio.

In the women’s javelin, Madara Palameika produced the three farthest throws of the day and improved her own season’s best to a world-leading 65.68m.

It was redemption for the Latvian over Sunette Viljoen, who had overtaken her in the Diamond Race standings in Rome. With the South African finishing down in sixth place in Birmingham, the lead once again changed in favour of the visibly-delighted Palameika.