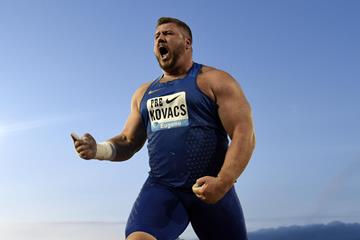 Joe Kovacs flipped the switch and the ball went flying. The world shot put champion uncorked a world-leading 22.13m on his final attempt to close out a dominant performance at the IAAF Diamond League meeting in Eugene on Friday (27).

After coming out with what he described as a cautious first attempt, the US putter held the lead throughout the competition and improved every round throughout a chilly evening at the Prefontaine Classic, becoming the first man beyond 22 metres this year.

“It’s the body waiting to have that little gear change," said Kovacs. "I didn’t do it in the first couple throws but I could feel the rhythm and excitement coming."

Kovacs took the lead after the first round with 20.41m and improved with his next effort to 20.49m. In the third round, he broke the 21-metre mark with 21.26m and, after that, he was never seriously challenged.

His final three efforts saw him unleash successive marks of 21.57m, 21.66m and then 22.13m with the last throw of the evening, and the competition already convincingly won. New Zealand’s world indoor champion Tom Walsh finished second with 20.84m.

After this meeting, Kovacs now has the four best efforts in the world this year but he sees much more improvement ahead of him.

“I’m probably in better shape than I’ve ever been in my life right now. When I see 22 (metres) something, it’s fun to see, but I think there’s another level. I’m not there yet and it just takes time to let the body get used to all the little stretches, the pressures on the hand, everything seems like it takes a little bit longer but it goes a lot farther.”

Reese holds on to indoor momentum

It took less time for Brittney Reese to assert her control in the women’s long jump.

Competing against a field Reese expects to see later on this summer at the Rio 2016 Olympic Games, she won with a first-round jump of 6.92m.

“My main goal was to come out here and put something big out and have them chase it, but I had some really good fouls after that which were over seven metres,” said Reese, whose first-round mark held up against Serbia’s Ivana Spanovic, who jumped 6.88m for second place.

Reese is coming off a strong winter where she won at the IAAF World Indoor Championships Portland 2016 – with Spanovic also second there – to reclaim her spot at the top of the long jump world.

“My rhythm is set now and I think that had a lot to do with indoor.”

Her retooled rhythm has led to fewer fouls, which has been a common occurrence throughout her career.

Still, she went over the board on her final two attempts, something she attributed to the new rules allowing only the top four jumpers to advance after the first three rounds.

“I was a little winded, I’m not even going to lie, the last two jumps I was like, ‘my name up again?’ I didn’t get a good chance to catch my breath.”

In the discus, Sandra Perkovic threw 68.57m in the fifth round to take the victory.

Entering the final two throws of the competition, she trailed Germany’s Nadine Muller, who had thrown 64.98m in the fourth round.

Perkovic responded with her winning throw with her penultimate effort and while Muller improved in the final round, her 65.31m was only good enough for second place.

Mo Farah wanted a faster time and better competition in the 10,000m but instead he had to settle for a world-leading 26:53.71 and a sprint victory in the last 100 metres over a surprise rival.

“I finished the race and didn’t feel too tired,” Farah said. “When you finish a race, you’re tired, you’re knackered. I feel alright so that’s a positive thing.”

A slight breeze impacted the runners, but the lead pack was able to hit 5000m in 13:23 as Farah floated throughout the group of runners at the front.

Nicholas Kosimbei threw in several surges to keep the pace honest. The pack, led by Farah, caught the Kenyan on several occasions only to see the 19-year-old push out to a lead again.

With 800 metres left, Farah passed Kosimbei for good. On the last lap, William Sitonik moved out of Farah’s shadow and grabbed the lead. Farah bided his time and waited until less than 100 metres to go counter the move with another big kick at Hayward Field.

“I was just testing the guy (Sitonik) to see what he’s got.”

In a field that didn’t include many of the biggest names, Farah admitted he wasn’t familiar with either Kosimbei or Sitonik.

“It was just very surprising," said Farah. "In Daegu (the 2011 World Championships) I remember Jeilan, I had never heard of him or anything and then come to the World Championships in the 10,000m he ran past me. You can’t take it for granted, you gotta know who’s who.”

In other action, Alysia Montano won the women’s 800m in 2:00.78 and world champion Pawel Fajdek won his 22nd consecutive hammer competition in a row with a distance of 80.28m, increasing his lead in the IAAF Hammer Throw Challenge standings.